Please ensure Javascript is enabled for purposes of website accessibility
Log In Help Join The Motley Fool
Free Article
Join Nearly 1 Million Premium Members And Get More In-Depth Stock Guidance and Research
By Daniel B. Kline – Mar 1, 2016 at 10:30AM

The company is in the middle of being purchased, though it must still clear a number of regulatory hurdles.

Since mid-September, Cablevision (NYSE: CVC) has been in that weird limbo a company operates in when it has accepted a buyout offer but has not received regulatory approval.

The Long Island-based cable and Internet provider reached agreement with Altice, which trades on the Euronext Amsterdam exchange under the ATC.AS symbol, to be acquired for $34.90 per share. That's slightly higher than the company's $32.51 close on Feb. 26 and a decent jump from the $28.54 it closed at on Sept. 16, the day before the deal was announced.

Cablevision operates in what is known as the New York metropolitan area comprised of New York, New Jersey, and pats of Connecticut. The company has more than 3.1 million residential and business customers, with approximately 65% of its cable customers subscribing to triple-play services, according to a press release.

Despite it being a public entity, the company has always been controlled by the Dolan family, and CEO James Dolan released a statement on the pending merger.

"Since Charles Dolan founded Cablevision in 1973, the Dolan family has been honored to help shepherd our customers and employees through the most extraordinary communications revolution in modern history," he said. "Now, nearly half a century later, the time is right for new ownership of Cablevision and its considerable assets. We believe that Patrick Drahi and Altice will be truly worthy successors, and we look forward to doing all we can to affect this transition for our customers and employees."

Not everyone agrees, and the deal will face a number of hurdles as the company looks to get it approved at the both the national and local level. That will almost certainly impact the stock price going forward. 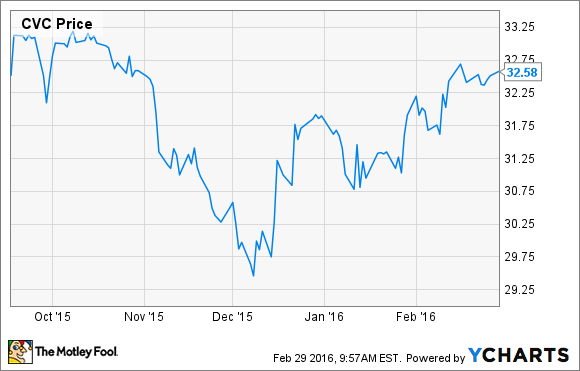 The deal is approved
Altice is trying to become a player in the United States, and it would be adding Cablevision to holdings that include SuddenLink, which would make it the fourth largest U.S. cable and Internet provider. Should that happen, Cablevision shareholders will see their stock purchased at prices higher than where it has traded since any point after the deal was announced.

This is the most likely scenario for the company, because even though New York City regulators and Mayor Bill de Blasio have made noise about fighting the deal, there are no clear reasons it should be stopped. This is not Comcast (CMCSA -1.15%) grabbing up another system to make the top provider even bigger. It's a foreign company trying to gain a U.S. footprint, where the objection from the city is mostly due to the job cuts that would almost certainly occur.

The deal is denied, and CVC goes it alone
The current Federal Communications Commission, chaired by Tom Wheeler, denied the Comcast purchase of Time Warner Cable and basically threw down a gauntlet to all cable/Internet companies. Even though this deal does not pose the same anti-competition issues the Comcast deal did, it's not out of the question that public sentiment would force the FCC to say no, or offer approval with conditions that cause one company or the other to walk away.

For example, Altice has claimed it will save nearly $1 billion between its foreign holdings, Suddenlink, and Cablevision. If the FCC demanded it keep certain levels of jobs, or stopped it from raising prices for a period of time, it's possible the company would walk. If that happens, Cablevision could see a stock increase merely because it would immediately become the most desirable asset in play in the cable/Internet space.

The deal is denied, and a better one comes along
When the Comcast deal was quashed, its intended purchase target was immediately swooped up by Charter Communications in what was arguably a better deal for shareholders. It's very possible that if the Altice deal is denied or falls apart, one of the other players in the space could immediately make an offer at a better price.

Cablevision has a very attractive subscriber base concentrated in one of the richest parts of the country. Those users would be an asset for any company, but they would be especially attractive to Comcast, which operates in adjacent markets.

It's possible that given the tightening market, the best thing that could happen for Cablevision shareholders would be for the company to be up for sale to the highest bidder. If that happened, it's very likely it would get a better price per share than Altice is paying.

Why Children's Place Stock Was Falling This Morning