Honeywell is holding up well despite economic weakness. Here three reasons the shares could move higher.

Honeywell (HON 0.25%) is an industrial conglomerate that hasn't seen its shares hit the skids. But it's also not rallying. Still, a look under the covers shows that there are a few solid reasons why Honeywell's stock could rise from here.

It's the economy
Like all industrials, Honeywell is feeling the pinch of a global economic slowdown, only it's holding up better than most. For example, excluding the impact of currency shifts, Honeywell's core growth was flat last year. That may not sound great until you compare it with the results of Eaton Corp. (ETN -1.26%), which saw organic sales fall 2%, and ABB (ABB -0.27%), where the top line fell 1% if you pull out currency changes. 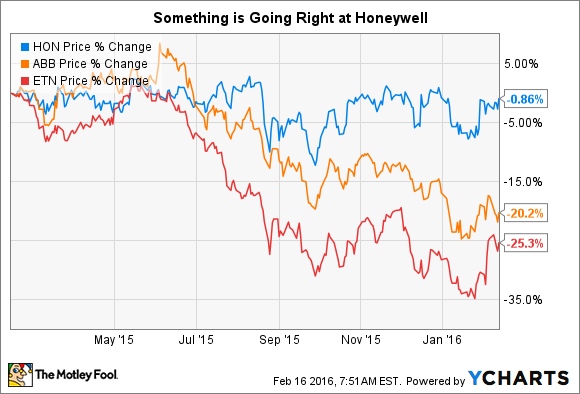 Perhaps equally important, Honeywell has done a great job at controlling costs. That allowed its earnings to advance 10% last year, pulling out one-time items, despite the weak top line. So it makes sense that Honeywell's shares are holding up relatively well. However, that doesn't mean an economic upturn won't benefit Honeywell. In fact, if this is how well it performs in a tough market, imagine what the company could do if the global economy were expanding more robustly.

So if you're watching Honeywell, be pleased that it's performing well today. But keep in mind that a return to robust global economic growth could really turbocharge results and the shares.

More savings!
One of the big things helping Honeywell's bottom line these days is a hefty dose of frugality. For example, the company spent around $160 million on restructuring efforts last year, helping it to improve its operating margins by 220 basis points. Yes, it's spending money to save money, but the end result is that Honeywell is getting lean and mean, and it's showing up on the bottom line. These efforts were a big part of the industrial conglomerate's ability to move earnings higher despite flat sales.

But it isn't done. It's identified more areas where it thinks it can cut costs and expects to improve segment margins in 2016 by as much as 110 basis points. And that, coupled with core organic growth of up to 2%, should help drive another year of earnings growth. The high point of the company's guidance calls for a 10% improvement on the bottom line. If Honeywell can pull that mixture of sales growth and cost cutting off, investors are likely to reward the stock with a higher price.

Buying growth
Another area to watch is acquisitions. And it doesn't need to be big deals, since Honeywell's business spans so many different areas, including aviation, automobiles, industrial controls (think thermostats and the like), and specialty chemicals. A few bolt-on additions would be more than enough to push investor sentiment on Honeywell higher and might even be more desirable than a big, complex purchase.

There are a couple of reasons acquisitions could draw investors in. First, one of Honeywell's strengths has been improving the performance of its divisions. When it adds a new business, it gets to overlay the Honeywell way of doing things, trimming costs and improving margins. Two, adding new businesses adds revenue and can help expand the company's market reach. Three, with so many industrial companies feeling the pinch of weak global growth, now is a great time to be a buyer.

In 2015, Honeywell, a company with more than an $80 billion market cap, spent roughly $6 billion on acquisitions. Although you can't predict this type of thing, if you're watching Honeywell, keep an eye on the company's acquisition activity in 2016. A few good additions, which could be bolt-on in nature, might just lead to a more positive view of the shares.

Hanging tough
If you had to summarize Honeywell's business today, you might use a phrase like "hanging tough." And investors have rewarded it for that strength in the face of a difficult global economy. However, should the economy pick up, Honeywell is likely to benefit right along with its competitors. That should lead the shares higher.

But it isn't just the big picture that could have an impact here. Cost-cutting and acquisitions are two other areas that Honeywell can leverage, and has leveraged in the recent past, to improve results. If it continues to do well on these two fronts, investors are likely to reward the stock with a higher valuation as well.