Dividend cuts were a must for offshore drilling companies, but will they be enough?

It looks like the persistence of low oil prices caught Atwood Oceanics (ATW) by surprise. After sticking with its $0.25 quarterly dividend throughout 2015, it finally slashed its payout last quarter to just $0.08 a share. On Feb. 18, only months after the previous cut, it decided to completely eliminate its quarterly dividend to provide "greater flexibility to weather the current downturn." During its announcement, management cited "extremely challenging market conditions."

While dividend cuts will undoubtedly help struggling operators lile Atwood preserve cash, how much can it really stem the tide of collapsing global demand for offshore drilling services?

There's no escaping falling demand
In January, the CEO of offshore drilling company Seadrill Limited (SDRL) said that market conditions will probably remain dismal until at least 2017. Low oil prices present very little incentive for companies to continue drilling a significant portion of the cost curve. For example, Rystad Energy estimates that while "oil sands and the Arctic are the most expensive supply segments with an average breakeven of $80 a barrel," offshore production is a close second, at an "average breakeven price at $60 a barrel." With oil around $30, demand for additional offshore drilling services is scant. 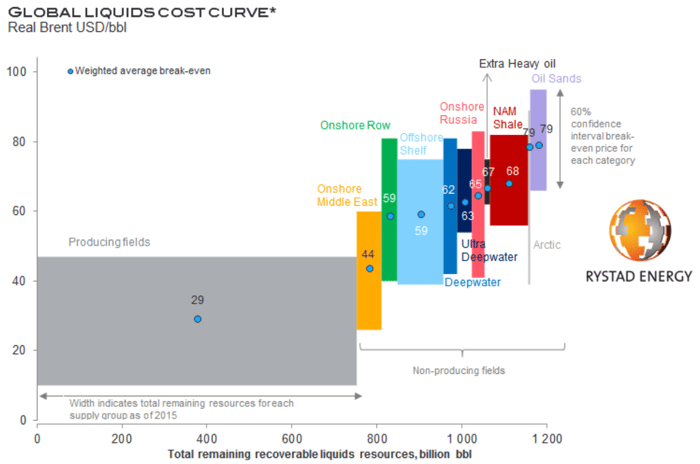 Taking a look at Atwood's backlog, it's clear that crumbling demand is more than theoretical. In 2016, only 64% of its rigs are contracted. By 2017, that drops to under 20%. Even if capacity utilization can be salvaged, it will probably be at much lower prices. Industry capacity utilization is at just 75%, prompting an analyst at Raymond James to describe the market as one of "unrelenting oversupply." Because these are high fixed-cost assets, it may take years of scrapping and decommissioning to balance the market, even if oil prices do rebound. 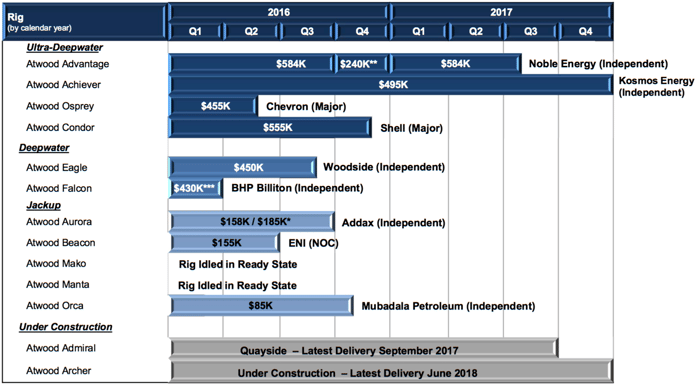 How long can Atwood last?
Investors outside the offshore drilling space are getting ready for some massive insolvencies, raising funds to capitalize on what could be a buyer's market. Several ventures are specifically targeting offshore companies and their assets, featuring big-name buyers such as Blackstone partner Clarion Offshore Partners and John Fredriksen-backed Sandbox. Will Atwood's assets eventually end up in liquidation?

When you do the math, Atwood probably has at least two years before things start getting tricky. As of the latest quarter, Atwood has $115 million in cash plus a $600 million credit facility. For its current backlog, management anticipates generating $605 million in after-tax cash flow. On the liability side, Atwood has about $200 million in capital expenditure needs through 2017, plus roughly $220 million in corporate costs and debt servicing. Put together, even with a weak market, Atwood should have about $890 million in liquidity by the end of 2017.

Some big risks remain, however. Capital expenditures are so low because the company is idling two newbuilds. Not including interest accumulation, Atwood is on the hook for $70,000 a day to the shipyard. At some point, it will need to pony up $400 million for the remaining installments.

The real issue is that many other major competitors have idled or delayed orders that have already been built. Around 299 rigs were ordered over 2011-2014, with many more waiting to enter the market if demand starts to pick up, probably keeping dayrates and profitability continually low for some time. If you're investing in offshore drillers such as Atwood or Seadrill, a conviction that these operators can stay solvent for years to come may be more important than simply believing in higher oil prices.

Ryan Vanzo has no position in any stocks mentioned. The Motley Fool owns shares of and recommends Atwood Oceanics. We Fools may not all hold the same opinions, but we all believe that considering a diverse range of insights makes us better investors. The Motley Fool has a disclosure policy.