Please ensure Javascript is enabled for purposes of website accessibility
Log In Help Join The Motley Fool
Free Article Join Over 1 Million Premium Members And Get More In-Depth Stock Guidance and Research
By Anders Bylund - Mar 1, 2016 at 11:27AM

It's a battle at dawn between titans of the tech industry. Which data center behemoth would you rather own?

Both stocks have produced plenty of millionaires over the years. But both are also facing brand new challenges in the ever-changing tech markets. Which technology behemoth is better suited for the next new era? Which one is the better investment right now?

Profits
Let's start from the top:

Yes, IBM runs the higher-volume business here. But Big Blue's lead only shrinks, the further away we get from simple revenues and closer to high-quality cash profits.

All else being equal, I would rather own the company with the wider profit margins and stronger cash generation per incoming revenue dollar. This round goes to Cisco.

Growth
Current profits are only one piece of a larger puzzle. Seasoned investors know to look for companies that can grow their sales and earnings over time. Let's see how Cisco and IBM stack up in terms of 5-year revenue growth: 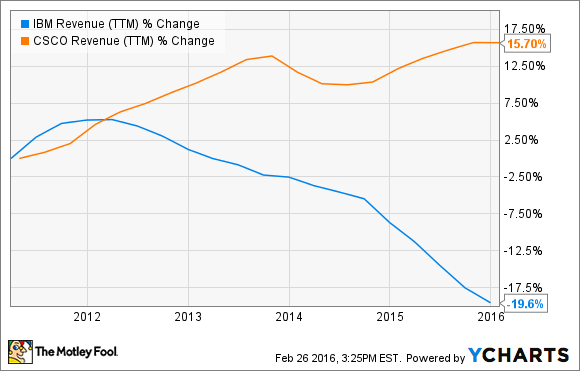 Ouch. IBM has been actively selling off or spinning out several operations during this time span, from PC systems to mid-range server hardware. The idea is to strengthen margins in the long run, but at the cost of sacrificing top-line revenues right away. Cisco has been moving in the opposite direction, often moving into the very spaces that IBM is getting out of. And a sale is a sale, so Cisco's revenue trend looks strong.

Alright, so if IBM is looking for wider margin while Cisco goes chasing sales, it stands to reason that IBM's cash profits must be outgrowing its cross-country rival, right? 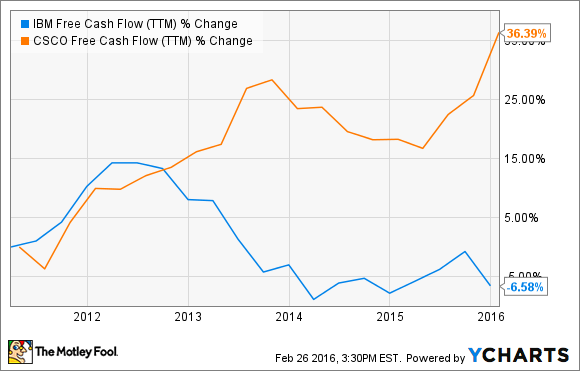 Well, that didn't work out either. IBM CEO Ginni Rometty's turnaround plan was always expected to take a while, but the traction is still nowhere in sight after four years in the slow lane.

Alright, OK. Let me drop any pretense of a fair and balanced analysis and give IBM an easy win. Big Blue is famous for its commitment to strong dividend growth, often going as far as taking out billion-dollar loans just to keep the dividend fires burning. And Cisco only started paying dividends five years ago, making it a toddler in this duel where victories often are built on long-term experience: 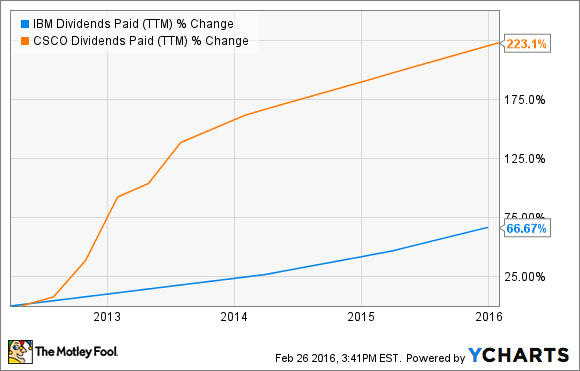 That's it. I give up. While it's true that Cisco started this particular comparison from a much lower base value, which makes for quicker percentage gains over time, the networking titan really wasn't supposed to beat IBM here. But it did, and both companies currently sport annual dividend yields between 3% and 4%.

There's just no other way to call the growth battle: Cisco wins again.

Valuation
So we're rounding into the final round with Cisco already holding an insurmountable 2-0 lead. But that doesn't mean that IBM goes home entirely empty-handed.

Big Blue's shares currently trade for less than 10 times trailing earnings, while Cisco's P/E is a much plumper 13 times trailing earnings. IBM is also more affordable in the light of price to free cash flows (though the difference is less impressive there). And since IBM bests Cisco's return on assets and return on equity, many a traditional value investor would argue that Big Blue is a better steward of investor capital and therefore deserves a richer valuation.

Reaching that conclusion would, of course, require investors to turn a blind eye to the profit margins and growth trends we already covered here. But it's fair to say that IBM's shares are priced to account for the stumbles in recent years, and for the possibility that Rometty never gets that turnaround effort off the ground.

Cisco shares are not expensive, but IBM's are priced for utter disaster. So if you see IBM slugging its way through these lean years, that's where you'll find the bigger buy-in discount today.

So IBM hangs out at the bottom of the bargain bin while Cisco supports its slightly ritzier valuation with healthier current business trends. As an IBM shareholder myself, I'll admit that the opposite situation would be much more comfortable.

I'm not selling my IBM holdings based on this analysis, since I still think that Rometty is pulling in the correct direction and that her efforts must eventually bear fruit. But I'm also walking away with a healthy respect for what Cisco is doing. That was not always the case.