If you've been drawn to Lilly's juicy yield, these two drugmakers would make far better additions to your dividend portfolio.

With their unique ability to turn research investments into patented life-saving therapies, drugmakers are viewed strictly as growth opportunities. Savvy dividend investors know some of the bigger players also distribute a sizable chunk of their profits to shareholders. In addition to potentially explosive growth and steady dividend payments, the resilience of drug sales during economic downturns creates a compelling trifecta that any income investor can appreciate.

If you're looking to add a big drugmaker to your income portfolio, the 135-year-old Eli Lilly and Co (LLY 4.12%), with a juicy 2.8% dividend yield, might seem like a good place to start. But, I'd like to walk you through some figures that suggest you would be far better off with either Johnson & Johnson (JNJ 1.46%) or Gilead Sciences (GILD 0.80%), depending on your risk tolerance.

The ghost of dividends past
Investors looking at Eli Lilly's recent dividend history are going to notice two glaring issues. First, until recently it had been frozen for years. Second, the percentage of profits required to pay those dividends is sky high. 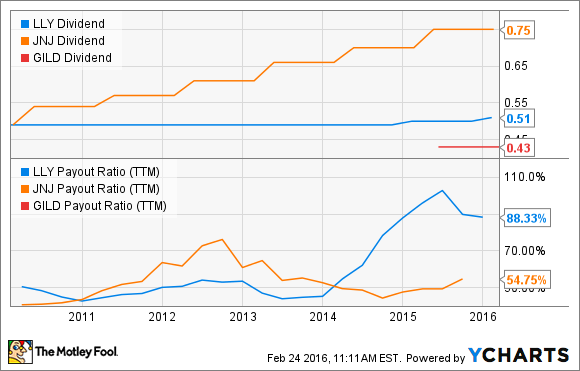 Gilead Sciences and J&J are on opposite sides of the spectrum in regard to dividend history. Gilead hasn't been paying dividends long enough to compare its trailing 12 months of payouts to profits (hence why there's no red line in the bottom chart), so let's look at recently reported figures. In the fourth quarter of 2015, it paid $0.43 per share against earnings of $3.26 per basic share, suggesting an extremely low 13% payout ratio. With all this room to run, the announced 10% raise to $0.47 per share beginning in the second quarter is lower than you might expect, but we'll discuss that in a moment.

Johnson & Johnson's dividend history is legendary, and at 2.9% the yield is slightly higher than Lilly's. After 53 consecutive annual increases, investors nearing retirement can practically consider J&J shares a bond with quarterly coupons that will continue rising long after their children have inherited them. With a payout ratio of around 55%, there's plenty of runway to continue those increases at an acceptable rate in the years ahead.

Beloved buybacks
I'll admit, Gilead's dividend yield of 1.95% is well below Lilly's. If you're decades ahead of retirement, I'd like to show you why Gilead may be the best dividend stock of the bunch.

While a 20-year horizon is impossible to predict for a company on the bleeding edge of antiviral technology, Gilead's enormous share repurchase program will make continued double-digit increases far less burdensome. Last January, Gilead announced a $15 billion share repurchase program. Earlier this month it announced an additional $12 billion once the previous allotment is spent. At the end of 2015, about $8 billion remained, giving the company around $20 billion to repurchase its shares. At recent prices that's enough to reduce the count by 225 million, or about 15% of total diluted shares outstanding.

Gilead management has absorbed a great deal of criticism for avoiding the M&A mania that gripped its industry over the past couple of years. It's true that some management teams use share repurchases to boost earnings per share and provide illusory growth. However, with a forward P/E ratio of just 7.4 -- or an earnings yield of 13.5% -- I feel Gilead's own shares represent a better investment for the company's enormous cash flows than speculating on regulatory and commercial success of another company's clinical-stage assets. 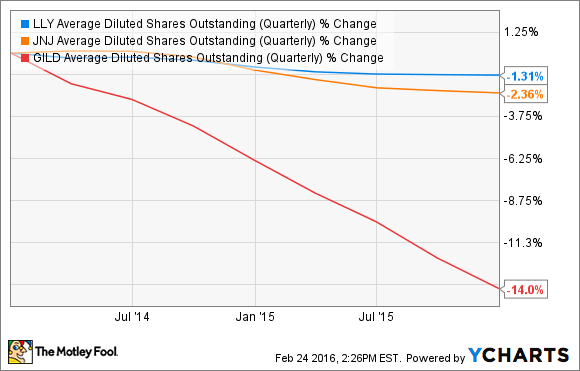 Gilead isn't the only company lowering its share count. Last October, Johnson & Johnson announced a $10 billion share repurchase program. With a much larger market cap than Gilead's, the impact will be relatively subdued.

Eli Lilly also has a share repurchase program that's just embarrassing measured against J&J and Gilead. It finished last year with $2.95 billion remaining from a $5 billion program begun in October 2013.

Driving growth?
It's important to remember that dividend growth is linked to growth of the underlying business. Eli Lilly isn't doing well on this front. Its aging product line is struggling. Last year, annual sales of its fastest-growing product, Strattera, rose 6% to $784 million. Among its top 10 products, Lilly increased sales of just three others. Humalog and Forteo grew 2%, and Cialis rose just 1% despite a slew of direct-to-consumer ads. With many of its top sellers facing patent expirations over the next several years, successful new launches are vital.

Lilly hasn't done too well launching new products, either. Its only entirely new chemical entity approved by the FDA last year, Portazza for treatment of lung cancer, showed less than exciting benefits during phase 3 trials. Given the success of immunotherapies such as Opdivo from Bristol-Myers Squibb and Keytruda from Merck in this indication, Portazza sales will probably be muted.

Lilly's biggest clinical-stage opportunity, solanezumab, has already failed one expensive phase 3 trial. Success in a redesigned trial for the Alzheimer's hopeful could offset upcoming losses to patent expirations and give the company a chance to raise its dividend at an acceptable rate. Given the past failure, though, its chances are mighty slim.

Better for everyone
For Gilead, more competition in the hepatitis C space is largely expected to keep the company from growing much over the next couple of years. I'm more optimistic and believe its pan-genotypic hepatitis C combination -- under priority review by the FDA -- that eliminates the need for costly, often non-existent genetic testing ahead of treatment could help Gilead exceed expectations. I expect its low payout ratio, and rapidly shrinking share count to produce some exciting dividend growth over the next decade.

With less than a full year of distributing profits under Gilead's belt, income investors approaching retirement might appreciate steadier, but less electrifying growth from Johnson & Johnson. With less than half of total sales originating from its pharmaceutical segment, the company has much less to fear from patent expirations.

That doesn't mean its drugmaking business is even in the same league as Lilly's. With five blockbusters reporting gains last year despite strong currency headwinds, and an impressive late-stage pipeline, I expect steady dividend growth from J&J for generations to come.