What: Shares of California Resources Corporation (OTC:CRC) are up more than 60% as of 11:30 am ET today following the company's earnings announcement. Despite posting an adjusted loss of ($0.20) per share, it was enough to beat analyst expectations.

So what: Clearly, there was a lot of pessimism baked into California Resources' stock to see such an increase after posting the results that it did. Sure, the company beat expectations, saw a 5% production increase in 2015 despite slashing the budget by 81% from the year prior, and was able to renegotiate some of its debt.  At the same time, it posted a loss even after pulling out a $4.8 billion worth of writedowns and didn't generate any cash from operations in the most recent quarter.

It appears, though, that Mr. Market is more interested in the good news from this earnings report. California Resources' management is guiding for another major decline in capital spending for 2016. This year's capital budget is expected to be $50 million compared to last year's $401 million.

Now what: As much as the 55% climb in share price sounds fantastic, keep in mind that California Resources' stock still has a long, long way to go before getting back to year-ago level. 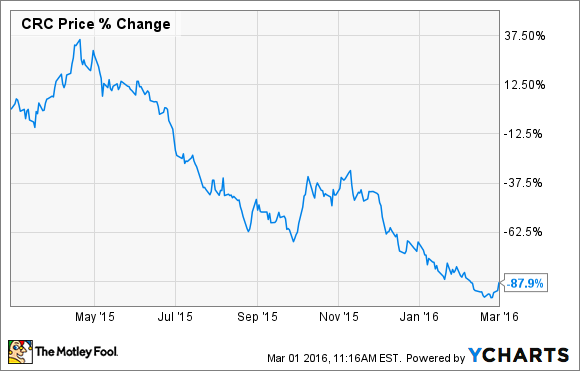 At the same time, the company is still sitting on $6.6 billion worth of debt. The interest on that debt is currently 15% of revenue, and that will continue to weigh heavily on its stock. Anyone looking at California Resources today should know that it is akin to a bet on oil prices as it won't likely survive very long on oil prices like this. Unless you are willing to make a bold bet on oil prices rebounding quickly, it may be best to shy away from this stock.