This home-improvement center has done well for investors over the past decade. Here's a guide to understanding how it's going to do in the future.

There are some key indicators to watch to determine how home-improvement giant Lowe's is likely to perform in the future. Photo credit: Mike Mozart.

For all the similarities that exist between Lowe's (LOW -0.53%) and Home Depot (HD -1.24%), there are important differences between the two big-box home-improvement centers. For example, while Big Orange is bigger in terms of revenues generated and numbers of employees, Big Blue is the older of the two -- by some 30 years, in fact -- and gives a more accessible ambience for first time do-it-yourselfers than does its rival with its more industrial feel.

But in the next five minutes, this quick primer will give you the key information about what drives Lowe's to succeed.

How Lowe's makes money
Lowe's, like Home Depot, caters to homeowners, renters, and professional contractors, but the atmosphere of accessibility translates into more sales for do-it-for-me customers than it does at its rival. In terms of both dollars and as a percentage of total revenues, Lowe's generates a larger portion of its sales from installations than does Home Depot.

While we wait for the two home-improvement centers to file their annual reports for 2015, looking back at the year before, we see Lowe's generated about 8% of its $56.2 billion in annual revenues from such professional services compared with about 4.5%, or $3.8 billion of Home Depot's total revenue of $83.2 billion.

Yet although Home Depot has seemingly been the dominant outlet for contractors and professional customers, in 2015 Lowe's also targeted that segment for expansion and noted during its fourth quarter earnings conference call that comparable sales to the pro market exceeded the 5.2% comp growth of the company as a whole.

How Lowe's will make money in the future
There are a lot of macroeconomic metrics Lowe's monitors that provide an indication of how the economy is performing that will reflect on its own results, including real disposable personal income and employment levels. Whether people have a job and how much cash they have left to spend will obviously impact their decision to decorate, renovate, or remodel their home. But nothing correlates more closely to Lowe's performance as does the overall health of the housing market. 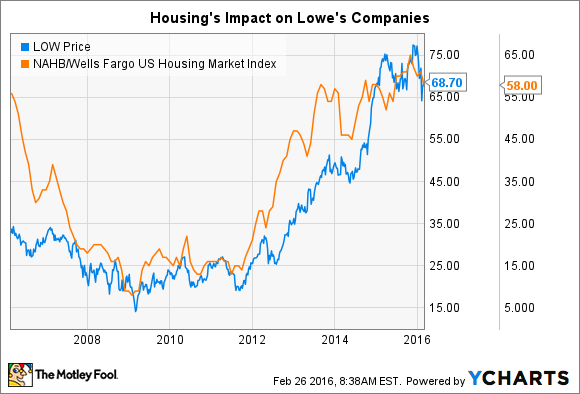 The housing market index in the chart above reflects market conditions for the sale of new homes as well as the stock performance for Lowe's and Home Depot over the same time frame. As is readily apparent, builder sentiment seemingly holds some predictive qualities when it comes to the fortunes of the home-improvement centers.

Yet we also see that Home Depot has outperformed Lowe's suggesting that while both benefited from housing's recovery -- the theory that a rising tide lifts all boats -- Home Depot likely benefited more because of the greater attention paid to contractors.

That's borne out by the performance of coverings specialist Sherwin-Williams (SHW -1.89%), which while also selling paint to consumers, really makes its money from professional painters who, like the home-improvement centers, do best when the housing market is healthy.

Sherwin-Williams does well regardless of the market because slapping a coat of paint on walls during a recession is a quick fix for a tired home (or for when you're forced to sell), but it does really well when housing is expanding. 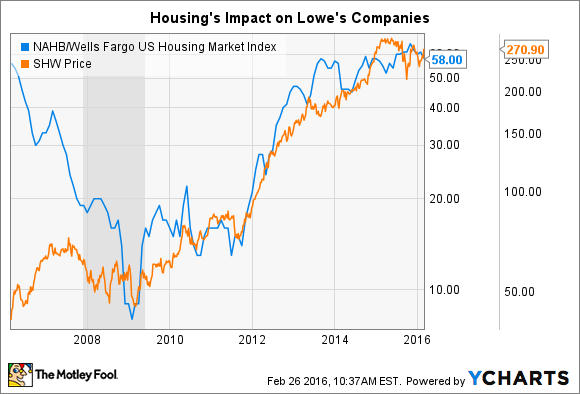 Tying it all together
Lowe's may have trailed its rival in the past when it came to targeting contractors and professional customers, but it's made long strides in narrowing the gap so that in the future the differences may not be so wide.

And as the U.S. economy continues to limp along, even if it's ahead of foreign markets, Lowe's is positioned to perform better than Home Depot because it does not have nearly the same exposure to currency headwinds that its rival does. Although both companies operate in Canada and Mexico (Lowe's just announced it was exiting from its joint venture in Australia with Woolworth's Limited), Home Depot derives more than 8% of its revenues from outside the U.S.; Lowe's says such revenues aren't meaningful.

A strong presence with homeowners, an improving relationship with professionals, and a housing market that while weakening is still on an upward slope, suggests Lowe's can turn in a solid performance going forward. All in all, there is a lot to like about this home-improvement center, one that is profitable, growing, and trades at an attractive valuation.

Rich Duprey has no position in any stocks mentioned. The Motley Fool recommends Home Depot and Sherwin-Williams. We Fools may not all hold the same opinions, but we all believe that considering a diverse range of insights makes us better investors. The Motley Fool has a disclosure policy.

Is Lowe's an Excellent Dividend Stock to Buy?
415%