Please ensure Javascript is enabled for purposes of website accessibility
Log In Help Join The Motley Fool
Free Article Join Over 1 Million Premium Members And Get More In-Depth Stock Guidance and Research
By Brian Stoffel - Mar 1, 2016 at 8:48AM

The company might not be profitable, but it's building a significant moat for the future. 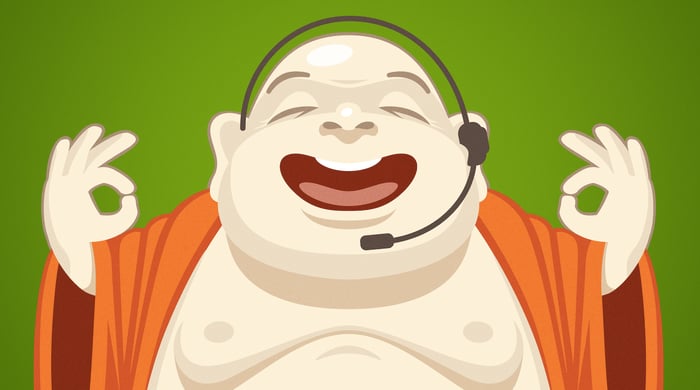 Zendesk knows how to keep things light -- and focused -- for its customers. Photo: Zendesk.

Recently, any stock that provides a cloud platform for enterprise customers has seen its stock get hammered. As reports came out that industry peers ServiceNOW and Tableau were expecting a weaker-than-expected year ahead, Zendesk (ZEN 0.59%) shareholders began to panic--taking the stock 30% lower in just three trading days.

But that hasn't stopped me from being interested in Zendesk. In fact, I recently bought shares for my family's retirement portfolio. Here's why...

The most important thing
Now in my seventh year as a professional (big F) Fool, I've come to realize that nothing plays a bigger role in the performance of a stock than the underlying company's sustainable competitive advantages. In Zendesk, I think there are substantial competitive advantages, especially for a company that's only been around since 2007, and is only worth $1.6 billion.

Zendesk is a "software as a service" (SaaS) company that helps its business clients manage their customer service platforms. A team, including current CEO Mikkel Svane, founded the company in Denmark, later moving to San Francisco. They believed that they could create a more seamless customer support solution, and the results show that they were onto something.

By the end of 2009, Zendesk had 1,000 customers. That figure increased 40 fold to 40,000 customers by February 2014, in less than five years' time. Here's what that growth has looked like since the company went public, focusing on both revenue and total paid customer accounts.

When you look at Zendesk's offering from a real-world perspective, you can understand the company's sustainablecompetitive advantages. It takes time for a company to train its employees to use a new CS platform. That means additional money, downtime, and training to get everyone up to speed. More than anything, it's an enormous headache for management -- if you've ever had to change an operating system at work before, you know what I mean.

That means that once Zendesk signs on new customers, it has high switching costs. Unless customer service from Zendesk itself is terrible (which would be terrible irony), or the prices the company charges become onerous, Zendesks' clients are incentivized to stay with their CS platforms.

This, plus the enormous amount of data Zendesk is able to cull from its customers and use to further differentiate its offerings, creates a significant moat for the company.

It doesn't hurt to have skin, and soul, in the game
In his excellent book Antifragile, risk specialist Nassim Taleb wrote about how one of the key mis-matches in society is that those who make meaningful decisions about how our society runs don't have enough skin in the game. In antiquity, the bridge architect had to live under his bridge -- he had serious skin in the game. But those who caused our banks to blow up in 2008 faced few real-life consequences.

That's why I love investing with management that has significant skin in the game. CEO Svane currently holds 6.5% of all shares outstanding, while two of his board members -- VC leaders Peter Fenton and Dana Stadler -- own a combined 18.4% of the company. By investing in Zendesk, you know that those running the company are in the same boat as you are.

Furthermore, the company still has all three founders on its board. Beyond Svane, co-founder Morten Primdahl serves as Zendesk's Chief Technology Officer, and the third in the trio -- Alexander Aghassipour -- is currently the company's Chief Product Officer. Far beyond financial motivation, these three have what Taleb would call "soul in the game." Zendesk is an outgrowth of all three of these men's existential selves -- it is a part of their identity. As a long-term, buy-to-hold investor, I want to be on the side of folks who are building a product for the long run.

What's not to like?
Given my glowing endorsement of the company, you might be wondering why Zendesk is still worth only $1.6 billion. Did we mention profits yet? Right, that's because Zendesk has yet to turn any as a public company. And even though the stock is down 33% from December's highs, it still trades for a pricey 7.5 times sales.

Those aren't valuations for the faint of heart. But the reason the company has yet to turn a profit is simple: with revenue growing as fast as it is, Zendesk needs to spend to build out its infrastructure -- both in IT and call center customer support -- so that the quality of its offering isn't diluted over time.

I have faith that ten years from now, it will prove to be a good investment, and I think it's at least worth looking into for the investor with a similar timeline.