Please ensure Javascript is enabled for purposes of website accessibility
Log In Help Join The Motley Fool
Free Article Join Over 1 Million Premium Members And Get More In-Depth Stock Guidance and Research
By Reuben Gregg Brewer - Mar 2, 2016 at 11:15AM

PG&E has had its share of troubles, but as they fade from memory, this Cali utility is in a surprisingly good position.

PG&E Corporation (PCG 0.00%) is the parent of the California-based utility that saw a natural gas pipeline burst in San Bruno. It was an awful accident, and it's hung over the company like a weight. However, with the stigma starting to fade, here are three reasons to believe PG&E stock could keep rising.

First things first
The first reason to think PG&E shares could keep rising is that the financial impact of the San Bruno disaster appears to be nearing an end. California regulators hit the company with a $1.6 billion bill in the first half of 2015. That doesn't mean the ordeal is over, but it is a sign that the utility holding company is over the hump, if you will. The hits in the future are likely to be smaller.

For example, PG&E has pledged to invest in upgrading its pipes. That's a cost that will linger, but it's an expense the company would have had to face anyway. And while there's likely to be ongoing legal battles over San Bruno, the $1.6 billion was really the big issue.

In fact, with that damage behind the company, it may feel comfortable resuming dividend growth again, having frozen the distribution after the incident. If it does, that would go a long way to restoring investor faith in the company and could lead to a higher share price all on its own. However, the longer-term benefit will simply be the healing nature of time as the market forgets the past and again focuses on the future.

Tough love
Another reason to like PG&E is that it operates in California, a very pregoreesive state when it comes to energy. In fact, California has among the most ambitious clean-energy plans around, and like it or not, PG&E has to comply with the plan. That leads to two generally positive things. 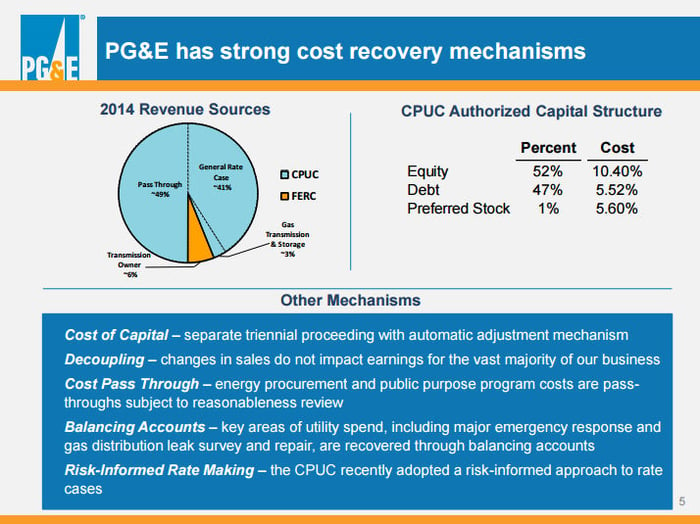 First, PG&E is spending money on things such as transmission and solar power development. For example, the company plans to invest roughly $1 billion in the grid over the next three years or so. That spans everything from substations to charging systems for electric vehicles. But that's just one part of much bigger plans. In total, the utility is planning on spending at least $5.3 billion a year through 2019.

Second, all of this spending should lead to increased earnings as investment spending flows through to rate increases. Although PG&E has to get its investment plans approved, its rate mechanisms and regulatory relationships are fairly positive, despite the San Bruno incident. As that event fades, it's reasonable to expect regulatory scrutiny to ease, too. So if robust spending plans lead to improved financial results, as they normally do, look for investors to reward PG&E with a higher stock price.

Ready for the future
The third reason PG&E stock could rise is tied to the second one, but in a different way. Because California is pushing so hard on the environmental front, PG&E is at the forefront of a changing utility industry. The past was made up of dirty power sources such as coal, and the future is clean energy such as solar and wind. 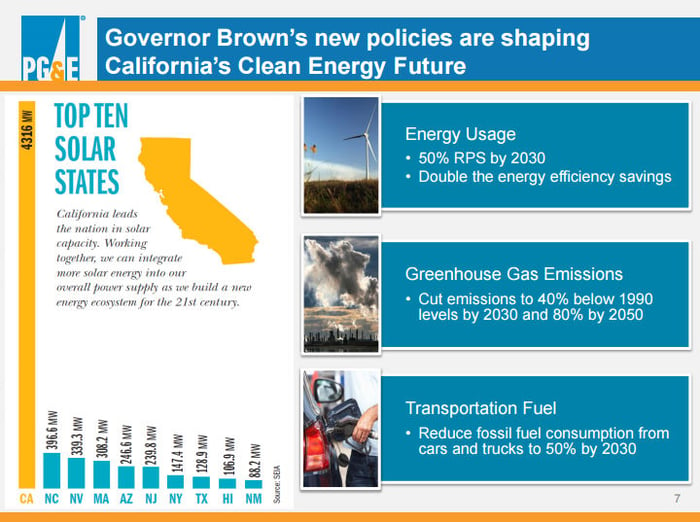 California, way ahead of the rest of the country on clean energy. Source: PG&E.

At this point, PG&E gets around 55% of its electricity from greenhouse-free power sources such as solar, wind, nuclear, and hydro. Although it generates only around 35% of the power it sells, roughly 80% of that is greenhouse-free. Compare that with giant Southern Company (SO 0.77%), which gets only about 20% of its power from carbon-free sources. The rest came from coal (a third of the total) and natural gas (nearly 50%). In an increasingly carbon-free world, Southern could find itself at a disadvantage.

Moreover, as PG&E continues to invest to meet California's stringent rules, it will get further and further ahead of its utility peers in the shift toward clean energy that's taking place across the nation. Investors are likely to reward the utility as this lead becomes more and more apparent and California-like rules increasingly spread to other states.

A rough stretch
There's no denying that PG&E has been in a difficult spot since the San Bruno disaster. And perhaps rightly so. But as that event fades, the company should be able to get itself back on a better footing. Investors have already started to notice. But the next big step is likely to be a dividend increase -- watch for that.

The spending that's been spurred by San Bruno and other factors, such as strict environmental policies in California, is more tied to the top and bottom lines, since spending usually leads to higher rates. As that normal trend plays out, PG&E's big spending plans should help boost results and lead to a higher share price. Lastly, all of that spending and the tough environmental regulations under which PG&E operates have put the company well ahead of many peers on the clean-energy front. That looks like it will be an increasingly important differentiation, notably for investors, as tougher environmental rules spread around the nation. That's a long-term issue, but a distinction that could easily lead to a premium valuation.