Please ensure Javascript is enabled for purposes of website accessibility
Log In Help Join The Motley Fool
Free Article Join Over 1 Million Premium Members And Get More In-Depth Stock Guidance and Research
By Daniel B. Kline - Mar 2, 2016 at 12:00PM

Call the fourth quarter of 2015 the period where the cable industry showed that cord cutting would not create quick devastation of the pay-television model. During the three month period all the major companies in the space reported either slight losses or slight gains.

Frontier Communications (FTR) followed those trends only losing 5,800 video customers. That number, along with generally positive Q4 results, which it reported on Feb. 23, sent the company's stock up from $4.55 where it closed on Jan. 29 to $5.41 at the end of the last trading day of February, an 18.9% increase according to data provided by S&P Global Market Intelligence. 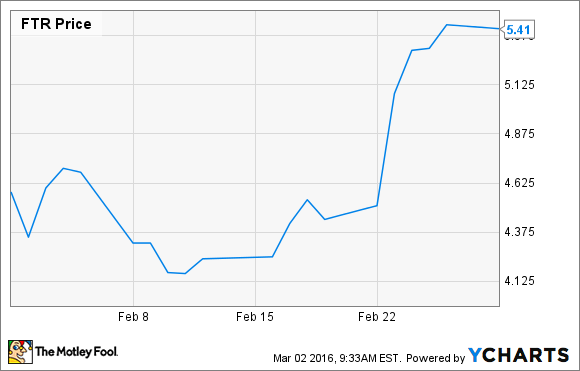 What: Even though it lost 1.7% of its business customer base along with 0.7% of its residential users, Frontier did post a gain of 28,500 net broadband customers in Q4. But, the only number that mattered was the video subscriber count which saw a drop, but only a small one. That's in line with what other companies in the cable space reported and it's good news in the short-term, if not a definitive statement that cord cutting won't prove to be a big deal.

So what: In the first two quarters of 2015 it looked like cord cutting might be accelerating. That seemed to make sense because it's logical that consumers would look to drop very expensive cable bills in favor of lower-cost streaming options.

An exodus from pay-TV could have hurt Frontier more than most companies because it markets itself as a cheaper alternative to traditional cable companies. Without price as a selling point, the company has very little to hang its hat on. But, at least for now, it seems that the number of people willing to trade big, bloated packages of cable channels in for cheaper streaming options is relatively small.

Now what: Frontier, like the rest of the cable industry has bought itself time. Cord cutting may not be here yet, but it's creating downward pressure on cable bills. This could force companies to hold prices in check and cause them to offer cheaper, skinny bundles with less channels at a lower price.

Like the rest of the pay-TV companies Frontier will have to change going forward. At some point business as usual won't work because enough viable choices will emerge for consumers to feel comfortable dropping cable. That day however is not here yet and the company, along with the industry, has time to make the needed adjustments.