After a merciless hammering, are the risks priced in to Exact Sciences' share price, or could it fall even further?

The past year has been rough on Exact Sciences' (EXAS 2.34%) stock. After successfully navigating key product Cologuard through the regulatory and reimbursement maze, sales expectations were sky-high -- and so was the stock. At its peak, the company's market cap soared to just over $2.75 billion. 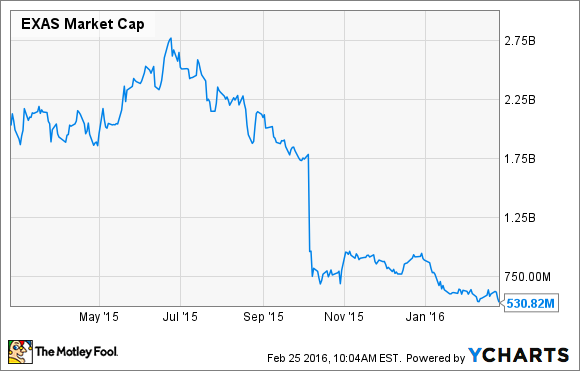 Now that the company's market value has fallen more than 80% from its peak, bargain hunters are right to wonder if there's a value opportunity here. Let's take a closer look at what challenges lie ahead for Exact Sciences to get a handle on just how risky this stock is.

Initial disappointment
With practically everybody over the age of 50 recommended to undergo regular colorectal cancer screening, it's easy to understand the enthusiasm that surrounded this company working to improve the process. Using the Cologuard kit is hardly a pleasant experience, but neither is a colonoscopy.

When Cologuard became the first colorectal cancer stool-based DNA test covered by Medicare, it seemed the advantage over colonoscopy would propel sales into the stratosphere. Well, first full-year sales of $39.4 million, from the completion of 104,000 tests was hardly the blast-off the market was expecting.

No sophomore slump expected
During last year's fourth quarter, Cologuard orders rose 27% over the third quarter to 27,000. Current growth at this rate makes this year's forecast of a 130% increase in completed tests (and revenue between $90 million and $100 million) feasible.

The company has had some success expanding coverage and reimbursement through an important Anthem (ELV -1.44%) collaboration. Cologuard is now covered as an in-network service in three states containing more than half of Anthem's 37 million members. Pinning down the exact number of addressable patients isn't easy, but the important takeaway is that coverage under Anthem alone gives Exact Sciences plenty of room to grow. Also, if it proves cost effective for Anthem, other insurers might come knocking.

In the numbers
Of course having a large addressable population to expand into isn't much help if the company can't reach profitability before the resources it has today dry up. Exact Sciences finished last year with about $307 million in cash and equivalents, a nice increase over the nearly $283 million it ended 2014 million with. What's troubling is that the average number of shares outstanding last year also grew nearly 15% to over 92 million.

With sky high expectations, it's understandable that investors were willing to accept a somewhat smaller slice of future profits in the years ahead of commercialization. However, the share count rose about 53% between 2011 and 2014, making another big 15% dilution during the first full year of commercialization much harder to swallow. Should investors just now opening positions expect their slice of any future profits to shrink as well?

Last year the company spent $24.5 million in order to collect $39.4 million in lab service revenue. This year it expects Cologuard revenue of between $90 million and $100 million. Supposing it hits the top end of full-year expectations, a similar gross margin of about 38% would put gross profits at $38 million. The company didn't provide much guidance for this year's operating expenses, but just for fun let's assume they remain in-line with last year's $174 million. Put it together and you're looking at another loss from operations of around $136 million. That $307 million cash cushion doesn't feel so comfortable anymore, does it?

The way I see it the company needs to cut operating costs, or at least hold them steady, while raising revenue by triple digits for a few years before it becomes cash flow positive. That's a tall order. If it's one Exact Sciences can't complete, expect further dilutions.

More than one way to avoid colonoscopy
Beyond requiring triple digit sales growth for several years, pessimism for the biotech industry as a whole is partly to blame for Exact Sciences' depressed shares at the moment. The reasons to be cautious don't end here though.

It's an extremely long shot, but DNA sequencing pioneer, Illumina (ILMN 1.27%) could render the Cologuard test obsolete. A joint venture formed in large part by Illumina, some venture capital backing, plus individual investors including Microsoft co-founder, Bill Gates, and Amazon founder and CEO, Jeffrey Bezos, is determined to produce a blood based, pan-cancer screen by 2019.

I strongly doubt the joint venture aptly named "Grail" will reach its goal in such a short amount of time. While liquid biopsies currently provide useful information for the treatment of patients already diagnosed with malignancies, detecting early stage cancers is far more complicated. In Illumina's favor, it's been profitable for years. With about $660 million in free-cash-flow over the past twelve months, plus some high-profile backing, Grail has enough resources that I wouldn't bet against its eventual success.

Unfortunately, mere announcement of progress from Grail or similar ventures could send shares of Exact Sciences tumbling. Measuring what needs to go right to produce significant long-term gains against everything that could go wrong makes it an extremely risky stock, at any price.