The odds are increasing that a tie-up won't happen. That's bad news for both companies' shareholders.

In November 2014, Halliburton (NYSE: HAL) and Baker Hughes (NYSE: BHI) agreed to merge, pitching "highly complementary product lines" and "nearly $2 billion in synergies". More than a year later, investors are becoming increasingly hesitant that the deal will go through.

Regulators don't look friendly
In January, a European commission launched an in-depth probe of the merger, citing "serious potential competition concerns in more than 30 product and service lines, both offshore and onshore." It noted that only three suppliers were currently able to provide integrated services that run across many product and service lines. The proposed merger would reduce that number to only two global competitors. In February, it halted the review for technical reasons, saying the companies failed to provide some details necessary for approval.

While European approval will have to wait until at least the summer, other regulatory agencies are similarly skeptical that the merger won't limit competition. The U.S. Department of Justice ruled that both companies need to increase their proposed asset disposals, saying that the current deal's efforts of maintaining competition are inadequate. Australian regulators also delayed a decision indefinitely with concerns over competition. The merger is also awaiting clearance from Brazil, China, and India.

What happens if a deal doesn't go through?
Both Halliburton and Baker Hughes are facing massive headwinds in their core businesses. Baker Hughes itself predicts that the global oil and gas rig count, already down nearly 50% in 2015, "could fall by another 30% in 2016 if oil prices fail to recover from current levels." The company's sales last year, which declined 36%, were indicative of this weakness.

Clearly, a tie-up would help both companies combine their financial clout and massive scale to better navigate the current downturn. If a deal doesn't go through, however, both companies stand to lose more than just potential synergies.

Tied into the pending agreement is a $3.5 billion breakup fee that would pay Baker Hughes roughly $8 per share. According to Bloomberg, "at about 10% of the deal value, the breakup fee is far larger than the average of 4% paid by U.S. acquirers this year." Additionally, Halliburton issued $7.5 billion in senior notes to help fund the deal, leaving it overleveraged if the deal falls through.

For Baker Hughes, a $3.5 billion breakup fee would probably be mitigated by the loss of any merger-related premium currently baked into the stock price. Additionally, losses at the company are greater than at Halliburton, causing many analysts to question how long Baker Hughes can operate as an independent company. In February, Morgan Stanley downgraded shares because the market wasn't "pricing in the necessary risk associated with a potential failed deal." 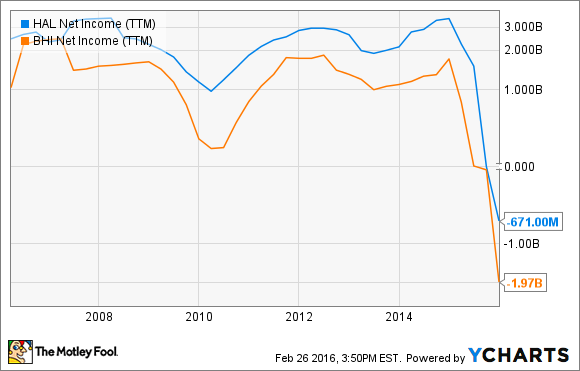 While you may be temped to purchase shares based on the long-term potential of a combined business, much of the anticipated synergies may not come to pass even if the merger goes through. On February 29th, the NY Post reported that the U.S. Department of Justice "is pushing Halliburton to go beyond its threshold of selling assets with $7.5 billion in 2013 revenue before agreeing to a combination...One analyst predicted total asset sales could top $10 billion in 2013 revenue."

This likely isn't just an issue of the monetary value of divestments, but rather the concentration of the remaining assets. A merger would reduce nearly 80% of the global oil services market down to just 3 players. To appease regulators, both companies would likely have to offer to divest some core assets that make the merger attractive to begin with. Remember, the merger isn't just to grow, but rather combine complimentary business lines to allow each firm to better weather the downturn. If the issue holding up regulatory approval stems from divestment concerns, investors will likely lose even if the merger goes through, as the concessions that would have been made would greatly reduce the anticipated benefits from when the merger was first announced. Merger or no merger, this appears to be a lose-lose situation.

Ryan Vanzo has no position in any stocks mentioned. The Motley Fool owns shares of and recommends Halliburton. We Fools may not all hold the same opinions, but we all believe that considering a diverse range of insights makes us better investors. The Motley Fool has a disclosure policy.