What: Shares of food distribution company Sysco (SYY 5.86%) jumped 10.8% during February, according to data provided by S&P Global Market Intelligence. Much of the gain was due to Sysco's fiscal second-quarter earnings report, which pushed the stock to a new 52-week high.

So what: Sysco reported quarterly revenue of $12.15 billion, up 0.6% year over year and in line with analyst expectations. Non-GAAP EPS of $0.48 beat analyst estimates by $0.07, driven by revenue growth and a 50-basis-point increase in gross margin. Real growth, a non-GAAP measure that adjusts for food cost inflation, acquisitions, and currency, rose 3% year over year.

I am very pleased with our second-quarter results. We achieved strong local case growth, while managing gross margins well and also containing operating expense growth. Through the first six months of the year, we are on track to achieve our financial objectives for the first year of our three-year plan.

Now what: While Sysco's results were far from stellar, they come at a time when smaller rival United Natural Foods (UNFI 2.77%) is struggling. Shares of United Natural Foods tumbled in late February after the company reported its own second-quarter results, the highlights of which were slowing revenue growth, declining earnings, and disappointing guidance. 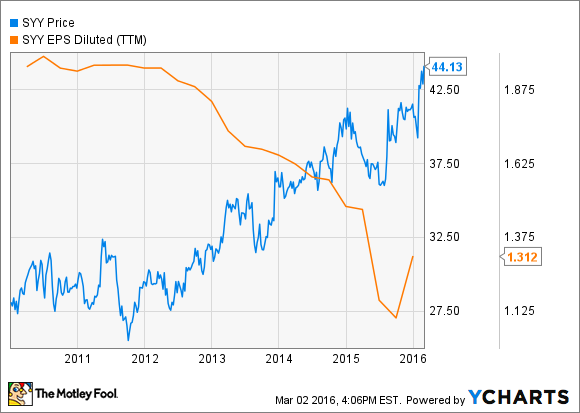 Despite Sysco's earnings having declined significantly since 2010, driven down by falling margins, the stock has surged, with February's jump pushing Sysco to new highs. Sysco is an expensive stock, trading at 35 times trailing-12-month earnings, a high price to pay for extremely slow growth. But Sysco's dominance of the industry is certainly worth something, and investors appear willing to pay a hefty premium for its shares.