Xtandi is quickly gaining on Johnson & Johnson's Zytiga and helping Medivation expand its pipeline in the process.

Along with the rest of the healthcare industry, Medivation (MDVN) stock has had a rough year, even despite a 10% pop following recently-announced strong fourth-quarter earnings. The boost was especially welcome after the beating Medivation has received this year alongside its iShares Nasdaq Biotechnology ETF (NASDAQ: IBB) counterparts. 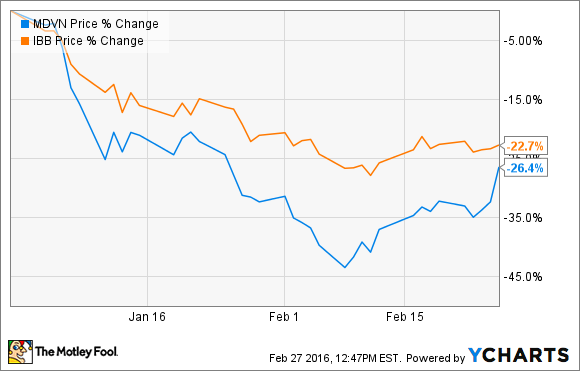 Despite the rough start to 2016, overall sentiment for the industry has improved recently and could continue carrying Medivation with it. That would also be welcome, but there are three more reasons I feel the stock could continue rising.

1. Xtandi overtaking Zytiga
Ahead of its launch, many expected Medivation's first commercial product, the prostate cancer therapy Xtandi, would blow past its main competition, Zytiga from Johnson & Johnson (JNJ 0.02%). It's taken years, but Xtandi is finally gaining ground. More proof it's on trajectory to overtake Zytiga and reach peak annual sales estimates of around $5 billion would be a tremendous boost to the stock.

On the surface, it looks as if early stage prostate-cancer patients given Zytiga are twice as likely to progress, or die, than those on Xtandi. It's important to note these were not head-to-head trials though, so any comparisons must be taken with a grain of salt.

One clear advantage for Xtandi is that Zytiga must be given in combination with Prednisone, a poorly tolerated steroid, but Xtandi can be given alone. It seems Xtandi's advantages are beginning to resonate with the medical community. Johnson & Johnson's reported annual sales of Zytiga fell 0.3% last year to $2.2 billion, although there was a 9.5% increase if you ignore the negative effects of currency exchange.

While this is an important win for Medivation, licensing deals limit Xtandi's contribution to Medivation's bottom line. The partners split U.S. Xtandi profits, while Astellas pays Medivation a royalty percentage in "the low teens to low 20s" on net sales generated elsewhere.

Astellas isn't the only entity receiving a slice of Xtandi sales. Medivation originally licensed the drug from UCLA, which is also entitled to a significant percentage.

Even though Astellas and UCLA are dipping their beaks into Xtandi's sales, Medivation is now generating substantial free cash-flow. 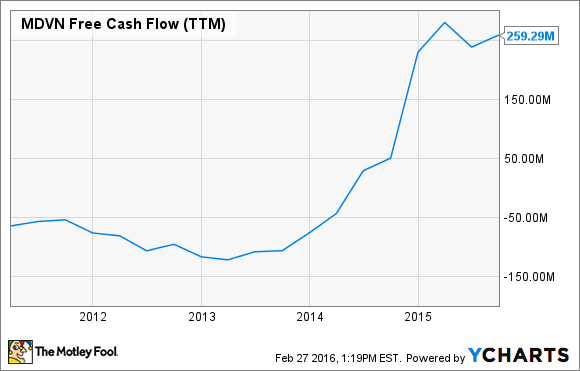 Now that Medivation has a chance to diversify away from its only commercial-stage product, let's look into two recently-purchased candidates that could begin adding to sales, over the next several years.

2. Talazoparib
Furthest along is talazoparib, a PARP inhibitor Medivation bought from BioMarin for $410 million upfront, $160 million in potential milestones, and single-digit royalties if commercialized. Should talazoparib succeed, the substantial cash flows currently generated by Xtandi should give Medivation the means to commercialize the drug without taking on a partner, keeping a higher percentage of sales in the process.

Investors won't have to wait too long to know if Medivation bought a winner or a dud. Although purchased just last October, BioMarin had already begun enrolling patients with advanced gBRCA mutated breast cancer in a phase 3 trial that Medivation will continue. In this open-label study, 429 patients will receive either talazoparib or their physician's choice of four common chemotherapies.

The trial is still enrolling, but top-line results should be available in the first half of next year. If talazoparib can significantly delay disease progression in this difficult-to-treat population, Medivation shareholders should reap some big gains.

3. Pidilizumab
Near the end of 2014, Medivation bought an anti-PD-1 inhibitor, or at least thought it did. Exploiting the PD-1 pathway is one way tumors hide from the immune system. The incredibly successful Keytruda from Merck and Opdivo from Bristol-Myers Squibb operate along these lines.

Last December, Medivation began a phase 2 trial with pidilizumab in advanced lymphoma patients. Weeks later, in early January, it announced an embarrassing discovery. It turns out the candidate doesn't actually bind to PD-1, but it does appear to improve immune response to tumors in some interesting ways that could eventually help it stand apart from the crowd. At least that's the spin so far.

Researchers must fill out an investigational new drug application before beginning human testing. Since part of pidilizumab's application was based on its ability to bind to PD-1, the FDA put the IND on hold -- effectively stalling the trial as well. The market was not pleased with the lack of due diligence, and the shares tumbled on the news.

We'll know if Wall Street overreacted soon enough. The company submitted revised documents in early February, and the FDA has 30 days to notify Medivation if the IND hold is lifted. If it is, the market may forgive the blunder, giving the stock a nice bump. Further ahead, success in the advanced lymphoma trial could provide more substantial gains.

What Pfizer Gets in Its $14 Billion Medivation Deal
409%