Cummins has fallen more than 30% in a the last year, how risky is this stock?

One of Rio's big trucks at work. Source: Rio Tinto.

Cummins (CMI -1.91%) is feeling the same pain that other industrial companies are feeling. But Cummins stands out from the industrial pack in a couple of key ways. Here's what you need to know to figure out how risky Cummins stock really is.

It's the economy ...
Cummins is an industrial stock. That's not such a great place to be today because industrials across the board are feeling the heat of a slowing global economy. For example, Eaton Corp. (ETN -2.14%) saw its organic sales, which strips out the impact of currency fluctuations, fall 2% last year. Honeywell (HON -1.95%) did slightly better -- its core sales were flat. That was enough, by the way, to keep Honeywell shares from falling into a rut like the stock of Eaton and Cummins.

So, like other industrials, Cummins is subject to the shifting winds of the global economy. That's a risk you'll want to be very clear on if you are looking at Cummins. But here's the thing: Eaton and Honeywell are both diversified companies. Eaton offers a broad range of electrical products and services, aviation products, auto and truck products, and hydraulics. Honeywell works in the aviation, automobiles, industrial controls, and specialty chemicals arenas. Cummins basically makes diesel engines.

... Or is it the economy?
So on the one hand a global growth slow patch is hurting Cummins, but its focus on just one major product category is another big issue. To be sure, it sells its engines to a number of different end markets, including the auto makers, but heavy industry of all sorts are vital end markets, too -- like construction, agriculture, and mining. When those industries go into a tailspin, it can have a big impact on Cummins' top- and bottom-line results.

So while Cummins revenues were only down about 1% last year, the shares couldn't escape concerns about continuing troubles in the mining and construction spaces. Take, for example, the continued troubles of miners like Rio Tinto (RIO -0.81%). It's one of the world's largest miners, but it's been cutting capital spending in a big way for a couple of years and isn't done yet; in 2016 Rio plans to trim its capital budget by another 15%. That's a more than 50% decline since 2015. And Rio isn't unique. Less capital spending means less need for heavy machinery -- and the engines that go in those machines.

With so much riding on these industries, you can't just look at Cummins as an industrial company. It's really a one-trick pony. To be sure, it's got a really good trick (it's engines are among the best out there), but as engine demand goes, so goes Cummins' results and, equally important, investor perception of the shares.

Better stay good
Which brings up another not so subtle issue -- staying ahead of the pack. Cummins isn't the only company that makes good engines. In fact, some of its customers make their own engines. Cummins has been able to lead the industry by spending money on research and development. Indeed, it's been at the forefront of meeting, and exceeding, environmental regulations. It's so good, it lobbies for emerging nations to beef up their regulations so it can outshine local competitors.

But other companies are catching up, and Cummins has to stay one step ahead or risk losing market share. Engines and the environmental add-ons to keep emissions down are complex beasts, so Cummins isn't in any imminent threat. However, it's going to have to keep working hard, and spending heavily, to maintain that lead. Thus, a third risk to watch here is how well Cummins is able to distinguish its products from those of competitors (and, in some cases, its very own customers).

Looking longer term, though, there's another risk to think about: Cummins is working to keep an older technology relevant. The future isn't diesel engines, it's electric. Truthfully, there's no real threat today, but you'll want to keep this issue in the back of your mind if you step aboard the Cummins train. 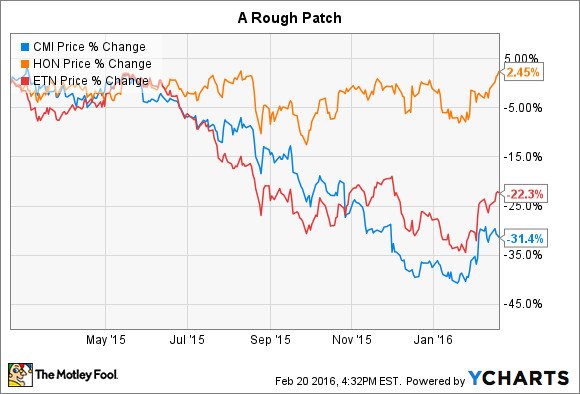 Food for thought
So you could easily lump Cummins in with the industrial sector and say that its woes are no different from any other industrial company. On some level, that's true. Slowing economic growth will, indeed, hit the company like it would any industrial. But because Cummins is so focused on just one broad type of product, there's a second level you need to think about.

For Cummins that means diesel engine demand. With so many key end markets like construction and mining in the dumps, investors are rightly concerned about the impact this will have on this key engine maker. And then there's the not so subtle issue of ensuring that its products are leading the pack, and that requires a costly and constant effort. In the end, Cummins probably has more risk than a diversified industrial like Honeywell or Eaton.