A disappointing earnings report, coupled with a biotech exodus, led to a complete halt of momentum for Momenta. 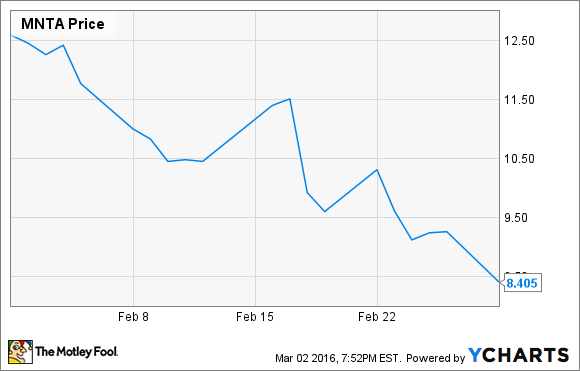 What: Shares of Momenta Pharmaceuticals (MNTA), a biopharmaceutical company focused on the development of generic and biosimilar drugs for oncology and autoimmune diseases, shed 33% of their value in February, based on data from S&P Global Market Intelligence. The reason behind the move lower appears to be a combination of investor sentiment and a weaker-than-expected fourth-quarter earnings report.

So what: The first issue for Momenta is one that's been widespread among drug developers: a fear of money-losing stocks. The vast majority of drug developers aren't making money, and they require a lot of capital to develop therapies and run clinical studies. When the stock market is volatile and trending lower (as it was for much of January and February), investors would just as soon hit the "sell' button and head for the sidelines. This very well could describe part of the trading action we witnessed in Momenta last month.

However, the unmistakable problem for Momenta was its weaker-than-expected fourth-quarter earnings release on Feb. 18. For the quarter, Momenta delivered $22.4 million in revenue, a nearly 6% improvement over the prior-year quarter, as it recognized $15.6 million alone in product revenue from Sandoz's sale of Glatopa, a generic multiple sclerosis therapy. Net loss for Q4 totaled $29.2 million, or $0.43 per share, which was a substantial jump from the $16 million loss, or $0.31-per-share loss, reported in Q4 2014. Comparatively, Wall Street had been looking for $30.5 million in top-line sales and a narrower loss of just $0.12 per share. In sum, Momenta missed by a mile.

Now what: The fourth-quarter report wasn't a complete loss for Momenta, as it also ended the year with $350 million in cash, cash equivalents, and marketable securities, which pretty much removes any near-term cash concerns. Nonetheless, it's pretty evident that Wall Street and investors were looking for substantially better sales of Glatopa since it was launched in June.

Momenta still has a lot of promise, with a number of biosimilar candidates being developed, including a half-dozen in combination with Mylan and a biosimilar for Humira, the best-selling drug in the world, being developed in combination with Baxalta. The Humira biosimilar would likely launch in 2018 if approved. The therapies Momenta is targeting with its biosimilars have tens of billions of dollars in current annual sales, so Momenta stands to benefit in a big way if it gain approval. Furthermore, a generic application for Copaxone, a multiple sclerosis juggernaut developed by Teva Pharmaceutical, is under review by the Food and Drug Administration.

Momenta is certainly more attractive now following its tumble, but its likelihood of producing a profit anytime soon still looks grim. Investors who are considering Momenta should understand that this is a play of five to 10 years at minimum and that patience is a must.