Both the Dow and S&P 500 started March off on the right foot, and so did stock prices of three companies.

It was a breath of fresh air when the calendar flipped over to March, and both the Dow Jones Industrial Average and the S&P 500 traded higher to kick off the new month, up 2.14% and 2.64%, respectively, for the week.

Positive economic data was released Friday, showing that the U.S. added 242,000 new jobs in February. This helped alleviate concerns raised during January's jobs report that suggested the rate of hiring might be slowing. But what is arguably even more important is that the labor-force participation moved higher, as more than half-a-million people joined the labor force, according to MarketWatch.

Moving past economic data from Friday, there were some stocks making big moves this week. Here are three. 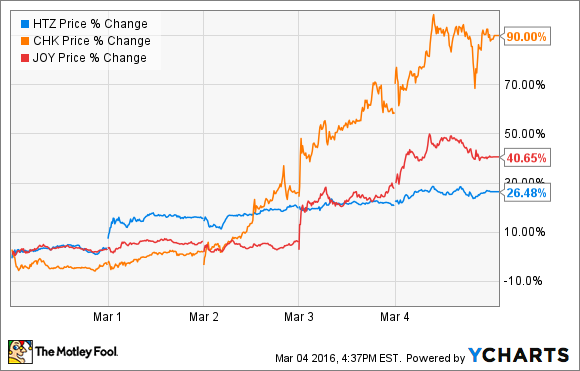 Some relief for energy stocks
Shares of Chesapeake Energy (CHKA.Q) rocketed 90% higher this week, as oil and gas prices edged up throughout the week. West Texas Intermediate prices rose consistently all week, ending above $36 for the first time since early January.

The other development helping Chesapeake Energy was an announcement that the company wasn't included in the indictment charges against former CEO Aubrey McClendon -- who passed away this week in a car crash. Investors might be more willing to invest with the company out of the indictment mess, but in reality, it's still going to be extremely volatile depending on oil prices.

Chesapeake remains a speculative stock, and if you're considering buying in solely on the fact that the stock almost doubled this week, do so at your own risk. Investors should likely wait until higher oil and gas prices appear sustained, and the company finds a way to improve its balance sheet.

Another rebound
Chesapeake wasn't the only company rebounding this week, as Joy Global (JOY) moved 40% higher. The company's first-quarter results helped power the stock, but it was in an unusual fashion. That's because it wasn't a great quarter; in fact, one could call it weak, with bookings declining 21% compared to the prior year, to $550 million.

Joy's net sales missed analyst estimates of $528 million by $2 million, and were down 25% from the prior year. Even the company's adjusted loss per diluted share checked in at $0.23, worse than analysts' estimates of a $0.12 per-share loss.

It's indicative of how badly Joy Global, as well as its entire industry, has been beaten down. The company reported a widening loss during the quarter, and was received with the stock moving about 20% higher in a single day solely because it didn't slash its outlook for the rest of 2016, as many feared. Investors might believe that Joy's management, by not reducing guidance for the year, marks a bottom for the company's cyclical business; but stay tuned -- that's far from a guarantee.

Notice a theme?
This week was full of companies that appeared to be rebounding largely from the fact that they were so oversold, that any positive news fueled a rising stock price. That's the theme for Hertz Global (HTZG.Q), as well, with the company moving more than 26% higher this week after reporting a mixed fourth quarter.

Hertz's revenue checked in at $2.41 billion, roughly $110 million short of analyst estimates, and a decline of 5.7% compared to the prior year. The total figure was dragged down by its international car-rental revenue, which was down 9.5% compared to the lesser 4.7% slump in its U.S. car-rental revenue. Hertz managed to beat analyst estimates on the bottom line, offering investors a bright spot during the company's fourth quarter. The company's non-GAAP earnings checked in at $0.05 per share, an improvement from the prior year's loss of $0.22 per share.

Despite Hertz's 26% surge in price this week, the company is still down a staggering 55% during the past 12 months. Investors are hoping the company can execute its cost-cutting measures with its goal of $350 million in savings this year compared to the $230 million in cost cuts last year, and return its car-rental business to growth.

What Investors Missed in the Stock Market This Week