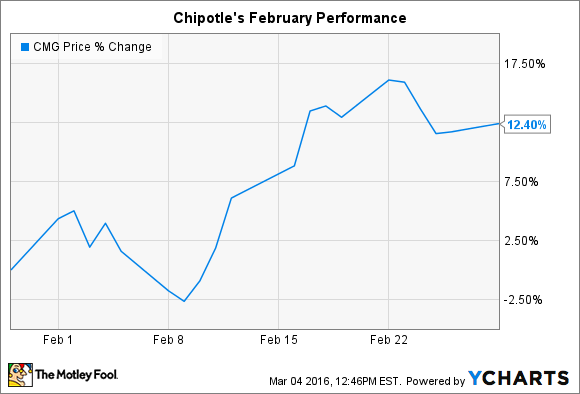 That bounce helped shares recover to over $500 apiece, up sharply from the $404 low they touched in January. The stock remains about 30% down from an all-time high set last summer, though.

So what: Chipotle's month started off on the right foot when the U.S. Centers for Disease Control and Prevention announced on Feb. 1 that it had concluded its investigation into an E. coli outbreak tied to several of the chain's restaurants. That good news was followed closely by a Q4 earnings report from the company that showed a dramatic sales decline: Comps plunged by 14.6% in the wake of negative publicity tied to the bacteria outbreak. Chipotle's profitability sunk as well, with restaurant-level margins falling by 7 percentage points to 20% of sales.

Now what: "2016 will be a very difficult year relative to our past performance," co- CEO Monty Moran told investors last month, though he declined to offer specific guidance on sales or profit numbers. The challenges include continued declines on both of those metrics while the company works to regain its customers' trust through a complete overhaul of its food handling procedures.

In addition, investors may have to deal with surprises from a continuing criminal investigation into Chipotle's food safety practices regarding a prior bacteria outbreak.

It's clear from their growth plans that management believes the brand's value hasn't been permanently diminished by the recent negative press. The company aims to open as many as 235 new locations this year to keep its aggressive expansion pace unchanged. Chipotle has also been busy buying up its own stock even as its sales growth trended sharply lower. Investors followed its lead last month and sent the share price higher.