Please ensure Javascript is enabled for purposes of website accessibility
Log In Help Join The Motley Fool
Free Article Join Over 1 Million Premium Members And Get More In-Depth Stock Guidance and Research
By Jamal Carnette, CFA - Mar 4, 2016 at 11:22AM

Was it meaningful, or just movement? 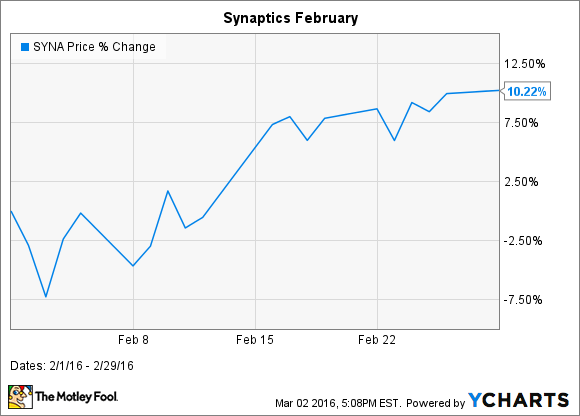 So what: Early in the month, Synaptics announced it was collaborating with auto-supplier Valeo to produce an automotive touchscreen with both force-sensing technology and haptic feedback. Apple has led in both technologies with 3D Touch present on the newest generation iPhone 6s and iPhone 6s Plus lines and haptic feedback on the Apple Watch, Synaptics recently unveiled its Clear Force technology that performs these same functions as an out-of-the-box solution for Android manufacturers.

Now what: For Synaptics, the question is will the new automotive business and next-gen features help the company offset mobile weakness? Last quarter, the company estimated 87% of its business came from its mobile business which includes tablet and smartphone sales. As a semi-finished product manufacturer, the company benefits from healthy growth in those markets. More recently, tablet sales have started to decline and smartphone sales have tremendously slowed.

Synaptics can offset weakness in these categories by getting its technology into a larger percentage of phones. I expect force-touch technology to become a standard part of the user experience, bolstering the company's Clear Force solution. Additionally, look for the company to report growth in automobiles going forward as the shift toward smart cars and connected cars is slowly but surely occurring.