Wynn Resorts is delivering big gains for investors on the back of improving demand in Macau.

According to data from S&P Global Market Intelligence, shares of Wynn Resorts (WYNN -0.02%) gained and impressive 22.5% in February, and they are up by an even stronger 28.5% year to date. The company has been materially hurt by depressed gaming demand in Macau over the last several quarters, but things seem to be improving in this important market for Wynn Resorts.

Playing a difficult hand
In mid-2014, the Chinese government started implementing a series of regulations and restrictions on visas for VIP gamblers in Macau to fight illegal money laundering via casinos in the region. This was a serious setback for all casino operators in Macau, and gaming revenue in the region declined by a breathtaking 34% during 2015.

Wynn Resorts generates more than half of its sales and profits from Macau, and the company is particularly exposed to the VIP market, so declining gaming demand there has wreaked havoc on Wynn Resorts over the last several quarters.

In this challenging environment, Wynn Resorts delivered a 17% decline in total revenue during the fourth quarter of 2015, driven by a 27% fall in revenue from Macau and partially offset by a 3.8% increase in revenue from Las Vegas. Gaming is a remarkably profitable business, though, and the company still produced an operating profit of $152 million during the quarter.

Things seem to be improving
It's too early to tell if things are definitely improving in Macau, but there are reasons to be cautiously optimistic. To begin with, Steve Wynn, CEO of Wynn Resorts, intimated on the latest earnings call that performance was improving in January. In his own words, January was "our best month in a long time."

It's not just Steve Wynn saying this either, as official statistics confirm that things are starting to look better. Macau gaming revenue during February declined only 0.1%. The year-over-year decline in November, by contrast, was 32%.

Even after such a big gain over the last few months, Wynn Resorts stock is still trading at a discount of more than 60% compared to June 2014, when things started turning south for casino operators in Macau. The stock also yields 2.4%. 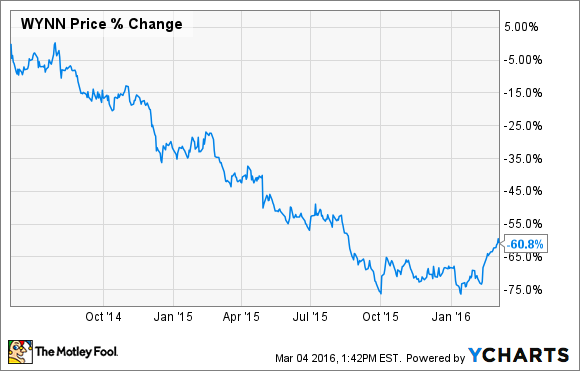 This could mean that the bull run in Wynn Resorts may not be over. If gaming demand in Macau continues improving, returning to levels before the Chinese government intervention, then the stock still offers substantial upside potential.