Please ensure Javascript is enabled for purposes of website accessibility
Log In Help Join The Motley Fool
Free Article Join Over 1 Million Premium Members And Get More In-Depth Stock Guidance and Research
By Dan Caplinger - Mar 5, 2016 at 7:21AM

Despite recent concerns that the industry boom could come to an end, the airline has chances to keep gaining altitude.

The airline industry has profited handsomely in the last few years, and United Continental Holdings (UAL 2.88%) has seen its stock gain a lot of altitude. Passing through ancillary costs to customers through baggage fees and similar charges has been highly successful for United Continental and peers Delta Air Lines (DAL 1.90%) and American Airlines Group (AAL 3.55%), and the drop in fuel costs sparked another upward move for the stock in late 2014. Since then, United Continental stock has been stuck in a holding pattern, but there are reasons to think that the airline's shares could resume their ascent. Let's look at three reasons United Continental stock could rise.

Continued low energy prices
United Continental has benefited greatly from the drop in fuel costs, and at least so far, there are few signs that those reductions will reverse themselves. In fact, after falling substantially in late 2014 and early 2015, jet fuel prices have extended their declines. 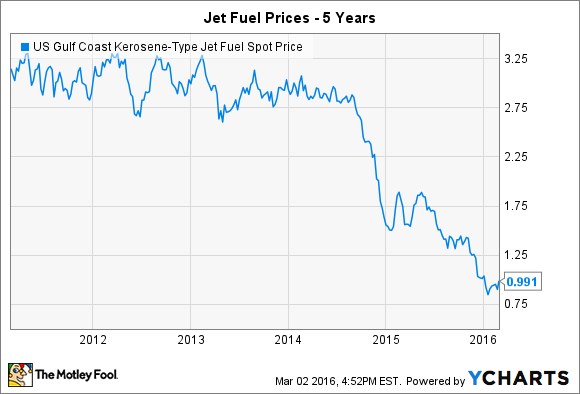 Energy prices are by their nature volatile, and so there's no assurance that United Continental will be able to count on favorable conditions lasting indefinitely. Nevertheless, the extended nature of the drop in the price of crude oil has surprised many market participants. Many investors have assumed that airlines would only be able to benefit from depressed fuel prices for a short period, and so the longer the low costs last, the greater the profits that United Continental will generate.

Those valuations aren't out of line for the industry. Delta Air Lines carries a forward earnings multiple of less than 7, and American Airlines Group has a similar forward P/E ratio of around 6. Nevertheless, what the valuations tell investors is that even if earnings do decline somewhat in the years to come, United Continental and airline peers like Delta and American will still look appealing compared to other stocks in the market.

Stock buybacks could support prices
Low valuations often spur companies to take action, and United Continental recently implemented a larger stock buyback authorization. In February, the airline said it would double its expected stock buyback during the first quarter of 2016, with new plans to spend $1.5 billion to repurchase shares. In its fourth-quarter financial report, United had said that had spent $520 million buying back shares during that quarter, leaving almost $2.5 billion remaining on its current authorization.

The $1.5 billion in repurchases for the current quarter represents roughly double the buyback volume that investors had expected. Some believe that CEO Oscar Munoz is trying to spur more dramatic action in light of the stock's poor performance over the past year, and his past history at other companies has shown Munoz's willingness to use repurchases aggressively. Nevertheless, the real question is whether United Continental can keep producing the earnings that it has brought in over the past year. Investors are skeptical, but if history proves United Continental right, then its buybacks could look prescient in time.

United Continental has seen its share price perform very well over the long run. With the help of these three factors, further gains are clearly possible if the industry environment remains as favorable as it has been for years now.