With the weak stock market early in 2016, do Realty Income investors have a reason to worry?

Realty Income Corporation (O 0.14%) reported its fourth-quarter earnings recently, beating estimates on both the top and bottom lines. However, with the market weakness so far in 2016, many investors are (understandably) nervous about whether or not the company's solid performance can continue this year. With that in mind, here are three things management discussed during the post-earnings conference call that could help shed some light on Realty Income's future.

2015 was a particularly strong year
I already mentioned that Realty Income performed better than expected in 2015. Revenue for the year beat estimates by about $2 million, and the company's AFFO of $2.74 per share handily topped the high end of the $2.66 to $2.71 range the company projected at the end of 2014, representing a 6.6% annual increase.

As a result, Realty Income continued its streak of dividend growth. The February 2016 payment is 5% higher than a year before, and will be the company's 74th consecutive quarterly dividend increase.

Impressively, the company achieved this while reducing its debt obligations. The fixed-charge coverage of 4.0 times is the highest it's been in over 10 years, according to CFO Paul Meurer.

Realty Income works in any economy
Realty Income's occupancy grew slightly during the fourth quarter to 98.4% and an economic occupancy (percentage of potential rental income) rate of 99.2% despite the company's most active year ever for lease expirations.

In fact, no matter what the market or economy is doing, Realty Income's occupancy rate has never dropped below 96%, nor has the company experienced a year with negative same-store rent growth.

As I've written before, the vast majority of Realty Income's tenants are mostly non-discretionary businesses, or are otherwise resistant to economic and competitive headwinds. According to CEO John Case, "The tenant base is in excellent shape ... right now, we feel good about our tenant base and their health and condition."

The company's portfolio is large (over 4,400 properties), geographically diverse (49 states and Puerto Rico), and diversified in regards to business type (47 different industries).

In a nutshell, not only is the company not worried about its tenants, but problems facing a single tenant or single geographical area wouldn't have a huge potential impact on the company's bottom line.

Looking ahead to 2016
Despite the market headwinds, Realty Income made it clear that it still anticipates meeting its 2016 acquisition target of $750 million. During the conference call, an analyst asked a question about the current acquisition opportunities versus three to six months ago, given the changes in the market over that time.

Case answered that the company still sees ample opportunities, and Income Realty shouldn't have trouble meeting its guidance for the year. He went on to say that the company is in a great position, especially with the recent rise in share price, as much of Realty Income's acquisitions are fueled by issuing new shares. When share prices are high, the company doesn't have to issue as many new shares to achieve the same results -- good for existing shareholders. 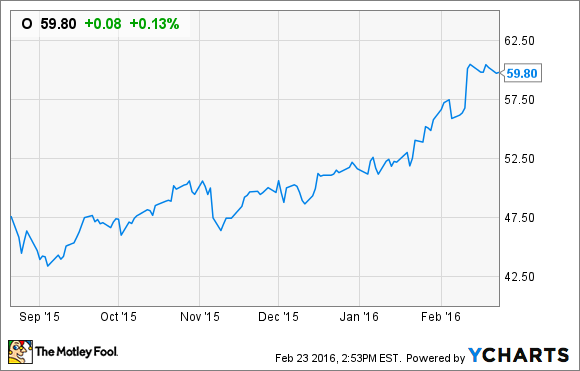 Also, the company plans to strategically dispose of between $50 million and $75 million in properties this year as part of its ongoing mission to redeploy capital effectively and maximize shareholder value. Just to give you an idea of the impact this can have, Realty Income disposed of $65.4 million worth of properties in 2015 at an unlevered return rate of 12.1%.

As Case said in his concluding remarks to investors:

To wrap it up, we had a great year and remain optimistic for 2016. Our portfolio is performing well, and we continue to see a healthy volume of acquisition opportunities. We remain well-positioned to act on high-quality acquisitions, given our strong balance sheet, ample liquidity, and cost of capital advantage.

In other words, Realty Income wants investors to feel confident in the company's strategy, which has proven to generate excellent returns over time, no matter what the market is doing.