Please ensure Javascript is enabled for purposes of website accessibility
Log In Help Join The Motley Fool
Free Article
Join Nearly 1 Million Premium Members And Get More In-Depth Stock Guidance and Research
By Daniel B. Kline – Mar 5, 2016 at 11:21AM

Even the bricks-and-mortar retailers at the top of their category have some things to be worried about.

Target was one of the more disappointing chains in the ACSI report. Image Source: Target

The American people are growing more dissatisfied with the retail experience, according to a new report [registration required] from the American Consumer Satisfaction Index.

ACSI's Retail Report 2015 shows that only two years after customer satisfaction with the retail segment reached an all-time high, with an ACSI index score of 77.9, satisfaction fell for a second consecutive year, sliding 2.6% to 74.8 on the 100-point scale. But while scores have fallen, they still stand 0.2 points above the long-term average for the sector, which is broken down into six sub-segments: department and discount stores, gas stations, drug stores, specialty retail stores, supermarkets, and online retail.

Of those six, in 2015, only gas stations saw satisfaction rise, which makes sense given that prices at the pump were down 9% in December year-over-year, according to ACSI, which uses data from interviews with roughly 70,000 customers annually to gauge customer satisfaction with more than 300 companies in 43 industries and 10 economic sectors.

Internet retail remained the highest-scoring category, despite a 2.4% drop for 2015 to a score of 80. Customer satisfaction with department and discount stores fell 3.9% to an ACSI score of 74, the lowest level since 2008. Despite the widening satisfaction gap between bricks-and-mortar and online sellers, and the fact that no company in the department and discount stores segment saw its score rise, the overall numbers are reasonably encouraging and in line with historical averages.

Which company took top honors?
Even though it lost some ground from last year, Nordstrom (JWN 1.00%) continues to top the department and discount stores segment and was one of only three companies in this sector, along with Dillard's (DDS -0.58%) and the Kroger-owned Fred Meyer superstore chain, to outscore the segment average of 77. Nordstrom did see its lead narrow, as its score dropped by 5% to 82, while Dillard's fell only 1% to 80. 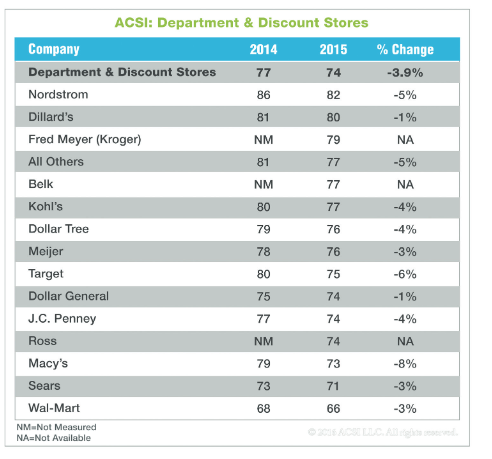 Going behind the numbers
Even though the segment saw its average scores drop by nearly 4%, people were pleased in a number of areas. Specifically, customers of department and discount stores gave them their highest mark for convenience of locations and hours (84). Shoppers were also happy with sales and promotions (80), as well as variety and selection of merchandise (79), according to ACSI.

Internet retailers do better when it comes to selection, with a score of 84, but brick-and-mortar chains have raised customers' satisfaction with their own online stores to a 78.

On the negative side, consumers are less happy with their dealings with call centers (75), and their opinions about store layout and cleanliness show there's room for improvement (75). But what people are least-satisfied with is the speed of the checkout process: On that, the retailers scored only a 70.

This is a warning bell
Even though numbers for the entire segment remain near historic averages, every company on the list above -- even Nordstrom and Dillard's -- should take note that their scores dropped. Clearly, the companies at the bottom of the list have a lot of work to do, but even the ones at the top are not just competing within their segment -- they must also fight off higher-scoring online retailers.

In many ways, shopping in a store is usually less pleasant than shopping online. You have to get there, park, deal with other people, wait in lines, and more. If physical retailers want to remain viable, and not just an option for when people don't want to wait for shipping, then they'll have to work to bring customer satisfaction back up. Failure to do that would likely drive more people online and make topping their category in this survey as irrelevant as being the most popular dial-up Internet service.

Daniel Kline has no position in any stocks mentioned. He generally prefers shopping online. The Motley Fool recommends Nordstrom. We Fools may not all hold the same opinions, but we all believe that considering a diverse range of insights makes us better investors. The Motley Fool has a disclosure policy.