Please ensure Javascript is enabled for purposes of website accessibility
Log In Help Join The Motley Fool
Free Article
Join Nearly 1 Million Premium Members And Get More In-Depth Stock Guidance and Research
By Daniel B. Kline – Mar 5, 2016 at 10:31AM

The company launched a smart promotion during the biggest football game of the year.

The pizza boss has not only tied his brand to Denver Broncos quarterback Peyton Manning, who appears in ads and own franchises of the pizza chain, he also launched a bold promotion in the lead-up to the Super Bowl (which his company sponsored). It was a smart move which seemed even smarter when Schnatter somehow managed to be in Manning's path after he walked off the field having won the championship in what may be his last game.

It was a perfectly orchestrated strategy by the CEO which led Papa John's stock to big gains in February. The company's share closed on Jan. 29 at $47.75 and closed February at $58.15, a 21.78% gain, according to data provided by S&P Global Market Intelligence. 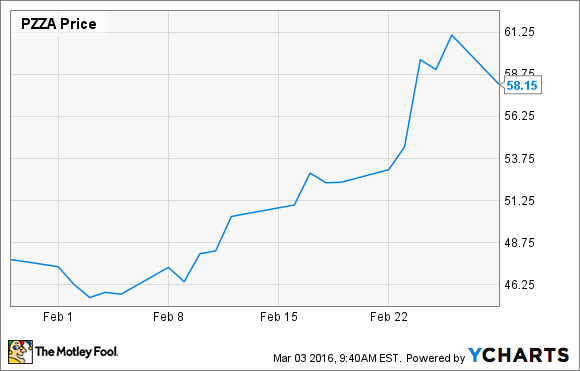 What: Though news of the promotion had leaked before the big game, Papa John's used Super Bowl Sunday to launch a quality guarantee that lets people get a free replacement if for some reason they don't like their pizza (presumably that reason would not be "because it was from Papa John's")

"Papa John's didn't need a 'Quality Guarantee', but if we want to live by our commitment to provide 'Better Ingredients and Better Pizza' we have to be able to deliver," said Schnatter in a press release. "That's why we're launching our 'Quality Guarantee' on one of the biggest stages in sports -- Super Bowl 50. When it comes to quality, it's simple. If you wouldn't put it in your pizza, we don't put it in our pizza. No ingredients you can't pronounce, no artificial flavors."

So what: This is an advertising masterstroke by a company which has used its smoke and mirrors "better ingredients, better pizza" slogan for years. The company never says better than which rivals. Is it better than other national chain delivery options? Maybe, but it's hard to argue that Papa John's pizza is better than pretty much any local pizza place.

Still, this is a very smart promotion because it's one the chain will rarely have to pay off. People ordering from Papa John's presumably like its pizza and those who are new to the brand and discover they don't likely won't want a replacement. That makes this a promise where the payout will only happen in the rare cases where a pie arrives cold or someone doesn't like a topping.

This is the classic grand gesture where there is very little payout.

Now what: The official pizza of the NFL and Super Bowl 50 will keep this promotion running through March 13. That, and the close association Manning has with the brand as he remains in the news, should propel Papa's forward into March.

It's not really about better pizza or quality. It's about creating a perception of those things among people who are choosing between the lesser of a few evils when ordering pizza from a national chain.

Daniel Kline has no position in any stocks mentioned. He was happy for Peyton Manning but wishes Papa John was not so prominent during his Super Bowl moment. The Motley Fool owns shares of Papa John's International. We Fools may not all hold the same opinions, but we all believe that considering a diverse range of insights makes us better investors. The Motley Fool has a disclosure policy.