An earnings restatement, guidance withdrawn, and an SEC probe -- oh my!

What: Shares of Valeant Pharmaceuticals (BHC 2.99%), an acquirer and developer of pharmaceutical products and medical devices, crashed a whopping 31% in February, based on data from S&P Global Market Intelligence. It would appear that a combination of three factors sent it reeling last month.

So what: The first issue for Valeant was the recent announcement that it would be restating its previous earnings results because of the way it recognized revenue at Philidor Rx Services. Valeant should have recognized $58 million in revenue at a later date, and not doing so is resulting in Wall Street and investors questioning its accounting practices on a broader scale. 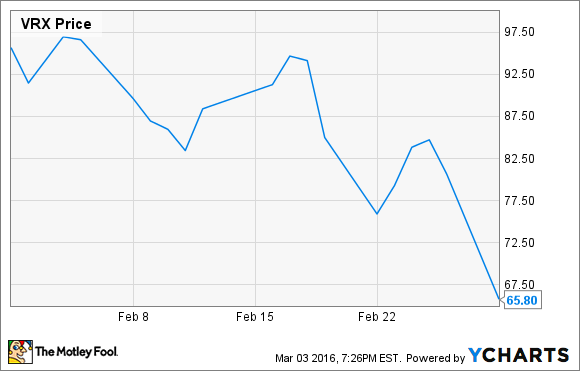 Second, while simultaneously announcing the return of CEO Michael Pearson from a pneumonia-related absence, Valeant also explained that it was removing its fourth-quarter earnings call and completely withdrawing its 2016 financial guidance. Pushing the quarterly results to a later date could raise some warning flags, especially when accompanied by the withdrawal of guidance.

Third, Valeant was hit with a probe by the Securities and Exchange Commission, which is never a good thing. The SEC is requesting information about its relationship with now-terminated drug distributor Philidor Rx Services, as well as emails, financial documents, and additional data. SEC investigations can lead to hefty fines if a company is found guilty of wrongdoing.

Now what: Long story short, it wasn't a very good month for Valeant, and it doesn't look as if it's going to get better anytime soon. Investigations by the SEC can linger for months, and investors are unlikely to be quick to forgive an accounting error, despite it being relatively small.

Furthermore, Valeant's business model is under fire with lawmakers in Congress, who want the company to explain its practice of acquiring certain drugs and raising their prices shortly thereafter. If Valeant were modifying the formulation or manufacturing process, that would be one thing, but in most instances, this isn't happening. Acquisitions are the core growth strategy of Valeant, so any disruption of this process could seriously hamper the expansion of its top and bottom lines.

On the other end of the spectrum, if Valeant can remain profitable at a similar level to what it's produced recently, it could be an exceptionally inexpensive stock. Although its forward guidance has been removed, even conservative forward P/Es place Valeant at just five times forward earnings.

This story is far from finished in terms of playing out, and shareholders who believe in the company's acquisition-based strategy should keep in mind that if its strategy is validated by lawmakers, it likely has a bright future.