What: Shares of Exact Sciences (EXAS 0.78%), a molecular diagnostics company focused on the development of early detection and disease prevention devices, tanked 22% in February, based on data from S&P Global Market Intelligence. The culprit appears to be another lackluster earnings report from the company. 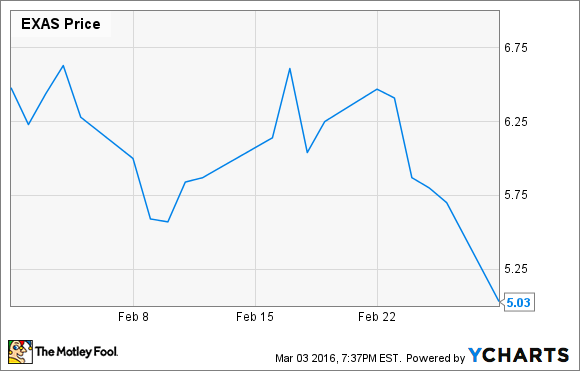 So what: On Feb. 24, Exact Sciences reported its highly anticipated but already reduced fourth-quarter results. For the quarter, the company recorded revenue of $14.4 million, which was the result of 38,000 completed Cologuard tests. Cologuard is a noninvasive colon cancer test kit that was approved by the Food and Drug Administration in Aug. 2014. Exact Sciences notes that the number of physicians ordering Cologuard tests grew 27% from the sequential third quarter, including an approximate 75% reorder rate. Net loss for the quarter ballooned to $40 million, or $0.41 per share, compared to $32.4 million or $0.38 per share, in Q4 2014.

Comparatively speaking, the $0.41 loss was actually a bit narrower than the $0.47 per share loss that Wall Street expected. However, even with reduced estimates, the $14.4 million in sales was slightly below expectations.

Looking ahead, Exact Sciences forecast that more than 240,000 Cologuard tests would be processed in 2016, which should generate between $90 million and $100 million in revenue.

Now what: The big issue for Exact Sciences is that the adoption of Cologuard isn't happening as quickly as Wall Street and investors would like to see. Part of this ties in with insurer coverage issues, while the remainder appears to be getting the word out on Cologuard and gaining physician adoption. Neither of these issues can be fixed overnight, and investors may be tired of waiting.

Additionally, while being approved for Medicare reimbursement is a good thing, there's always the concern that Cologuard, whose focus is on a mature and/or elderly audience, could come under pressure down the line from falling reimbursement rates.

Nonetheless, if Exact Sciences can right the ship, so to speak, there's definitely promise. Cologuard provided superior colon cancer and advanced adenoma detection compared to the prior standard of care, and the numbers suggest that, while not perfect, it could be a meaningful first step prior to a colonoscopy. And, given that the company recommends a Cologuard test be conducted every three years, Exact Sciences has a repeatable opportunity on its hands.

Investors who are considering this stock for their portfolio should understand that it's a company you'd want to hang onto for a minimum of five years. Losses are likely to continue for the next couple of years, but steady adoption of Cologuard could lend to healthy profits by the end of the decade.

3 Growth Stocks That Could Double Your Money, According to Wall Street
376%