Competitive fears dragged Exelixis' shares down 20% in February, but two news events might imply hope on the horizon. 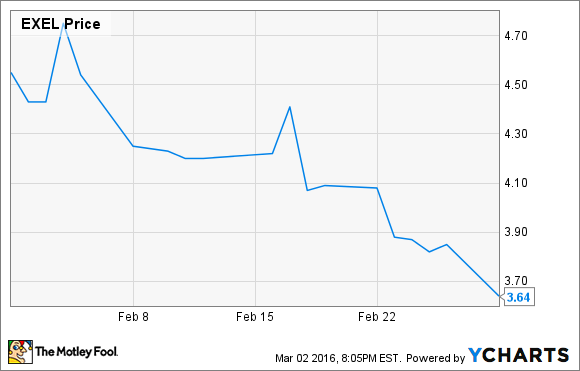 What: Shares of Exelixis (EXEL -2.70%), a biopharmaceutical company focused on the development of therapies to treat cancer, plunged 20% in February, based on data from S&P Global Market Intelligence. The two likely culprits appear to be market sentiment and a fear of increasing competition.

So what: Investor sentiment has been a problem not just for Exelixis but the entire biotech industry since the year began. Although we've been rallying nicely over the past two weeks, the majority of February was spent under a mountain of worry. When investors are concerned about the prospect of a recession and they're looking for safe-haven investments, they'll typically avoid companies that are losing money and burning through their cash on hand. Even with two Food and Drug Administration-approved products -- Cometriq and Cotellic -- it could be years before Exelixis turns the corner to profitability. Last month, we may have simply witnessed a continuation of the exodus from risky biotech stocks.

Now what: The irony here is that Exelixis' February news was actually quite positive.

At the beginning of February Exelixis announced new comprehensive data from METEOR that further solidified its statistically significant improvement in progression-free survival compared to the placebo, Afinitor. Furthermore, a secondary interim analysis showed a "highly statistically significant and clinical meaningful increase" in overall survival compared to Afinitor. This data suggests a label expansion is likely. 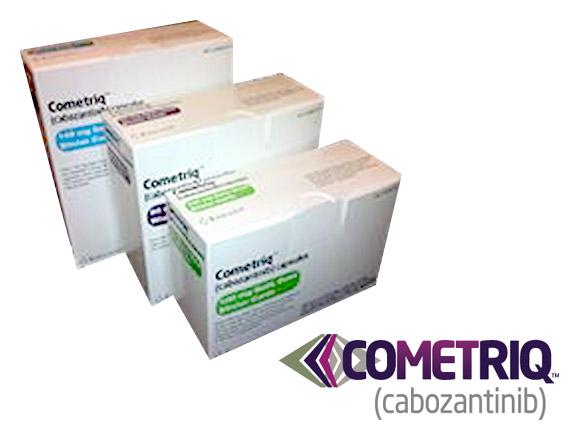 Then, at the end of the month Exelixis announced that it had struck a licensing deal with Ipsen (IPSEY 0.97%) for Cometriq in all countries except for the U.S., Canada, and Japan. The deal entitles Exelixis to $200 million in upfront cash, plus milestones of up to $60 million for the approval of Cometriq in the EU for mRCC, and up to $50 million for the approval of Cometriq as a treatment for advanced hepatocellular carcinoma, as well as tiered royalties that could equal up to 26%. Additionally, commercial sales milestones could be worth an additional $545 million. In sum, Exelixis' cash crunch is no longer a concern, Ipsen now has a potential moneymaker on its hands in the EU, and everyone appears happy.

As an Exelixis shareholder, I remain satisfied with the company's progress. Profits are indeed a ways off, but if Cometriq's label can continue to be expanded, and Cotellic, in combination with cancer immunotherapies, delivers strong clinical results, then Exelixis' true value could be much higher.

The Motley Fool recommends Exelixis. We Fools may not all hold the same opinions, but we all believe that considering a diverse range of insights makes us better investors. The Motley Fool has a disclosure policy.

Worried About Rising Interest Rates? These 2 Growth Stocks Could Offer a Solution
401%