By all appearances, McDonald's is a world famous hamburgers and fries joint. Encased within this business model, however, lies a brilliant real estate framework of long-term financing and variable operating agreements. The soul of McDonald's is its 36,000 properties, paid for with fries.

Ray Kroc, the founder of McDonald's (MCD 2.14%), once asked a group of MBA students to tell him what business they thought he was in. The hamburger business of course, they told him. No, he replied, "My business is real estate."

McDonald's enjoyed sales of over $25 billion last year (equivalent to just under 16 billion double cheeseburgers), and the company owns of some of the most valuable real estate across the globe. It is paid for with rent generated from the sale of its iconic burgers and fries, and in this regard, McDonald's business model resembles a 36,000 unit apartment complex. Here's a closer look at this business model and why investors should pay attention. 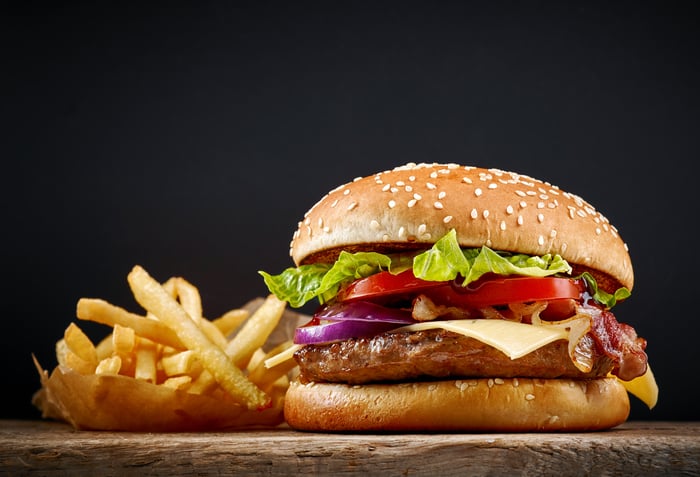 A real estate empire financed by French fries
The impetus for the McDonald's real estate business model originated in the 1950's when then CFO Harry Sonneborn recognized that the real value for McDonald's would be found in its real estate, not its hamburgers. The McDonald's Franchise Realty Corporation was launched in 1956 with the goal of purchasing cheap property along well-traveled byways for eventual McDonald's concept franchising.

Initially, headquarters leased the land and buildings and then subleased this package to franchisees who paid as much as a 40% markup on the root lease or 5% of sales, whichever was greater. This model eventually morphed into

mortgages for the properties equating to corporate ownership of both the land and building.

The franchisee's initial deposit, originally as low as $950, was used as the down payment. After setting up the franchisee to manage the business, corporate management could theoretically sit back and collect the royalty and rent checks, allowing the franchisees to purchase the property for the company.

As of Dec. 2015, McDonald's gross property, plant, and equipment totaled $37.7 billion on its balance sheet and represented just over 99% of the company's total assets.

The genius of the Sonneborn financial model is that the company financed the property using long-term, fixed rates but passed along variable fees to the franchisees. As sales and prices inevitably rose over the years, the franchisee's payments to corporate as a percent of sales inflated, while the company's costs remained virtually flat. This model turned McDonald's into a cash flow powerhouse and is still the backbone of the company today.

Ronald McDonald is your landlord
According to the company's 2014 annual report, under the conventional franchise arrangement, "... franchisees provide a portion of the capital required by initially investing in the equipment, signs, seating, and décor of their restaurant business and by reinvesting in the business over time." Furthermore, in a nod to Sonneborn, the report states that the company owns the land and building or secures long-term leases for both company-operated and conventional franchised restaurant sites.

Franchisees pay fees to McDonald's corporate in the form of initial franchise fees and rent and royalties based on a percentage of sales. According to the Wall Street Journal, U.S.franchisees can pay as much as 16% of sales in rent. They also pay a royalty fee and advertising fee of 5% each. The franchise operating agreements also include a minimum rent payment clause to hedge against low sales, and the typical agreement lasts for a term of 20 years.

This model of long-term financing coupled with long-term, variable operating agreements is a continuation of the Sonneborn model.

A monopoly board of franchises
This "rental income" (the rent, royalties, and initial fees) can be found on McDonald's income statement under "Revenues From Franchised Restaurants". In 2015, this figure was $8.9 billion, or 35% of the top line. The remainder comes from "Company Operated Restaurant Revenues", which clocked in at $16.5 billion last year. But with this second revenue source comes a much higher level of operating expenses: $14 billion in 2015, or 85% of total company operated restaurant revenue. Franchised locations, on the other hand, incur the costs of occupancy expenses, which for 2015 came in at $1.6 billion or 18% of total franchise revenue. It is important to note that franchisees incur the cost of goods sold and operational costs of a franchise location -- they do not flow up to the corporate income statement.

What this means for the individual investor
Think of it this way: An investment in McDonald's equates to the ownership of rock solid real estate assets -- although as evidenced by the Great Recession, real estate prices do not always go up -- that form the backbone of McDonald's balance sheet. The real estate is paid for with rent from the franchisees, predicated on the sales of the chain's iconic burgers and fries. In addition to purchasing the real estate, these sales also inject additional revenue into the income statement in the form of royalties and corporate store sales.

The owner of a four-plex has to rely on continued rent payments from tenants -- Bob, Joe, Jack, and Vince, let's call them -- while the owner of McDonald's stock relies on the continued sales of the Big Mac, Filet 'o Fish, and Egg McMuffin. Over the long-term, I believe this latter case is significantly more favorable.