What: Shareholders of Repligen Corporation (NASDAQ:REGN), a life sciences supply company, were treated to a profitable February as the company's stock gained 14.6% during the month, according to data from S&P Global Market Intelligence. 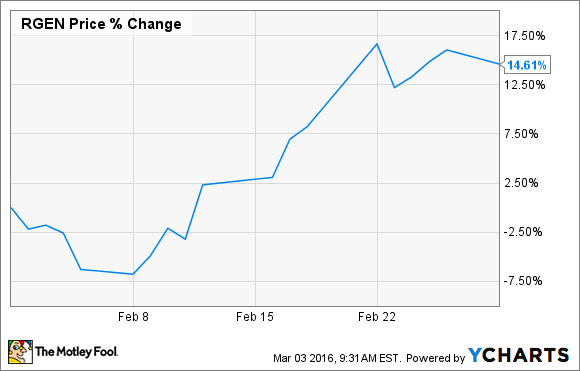 So what: The huge share-price movement is primarily owed to the solid quarterly results that the company reported during the month. Repligen reported fourth-quarter revenue of $21.4 million, which was up 39% versus the year-ago period and was nicely ahead of the $19.8 million that analysts were expecting. The company didn't perform quite as well on the bottom line as it recorded a penny of net income per share during the period, well short of the $0.07 that Wall Street forecasted. The big shortfall was caused primarily by a number of one-time costs, and if you adjust for those items, then earnings per share would have been $0.07.

Beyond the headline numbers, Repligen announced that it was able to extend its long-term supply agreement with GE's (NYSE:GE) healthcare division. Repligen has been supplying GE with its protein A ligands for years but its supply agreement was set to expire at the end of this year. This updated contract extends the two companies' relationship to the end of 2019, which is great news for Repligen's shareholders.

The solid quarterly results combined with the news of its GE supply agreement extension won the company some positive attention on Wall Street. A new research firm initiated coverage of Repligen's stock and the analyst rated the shares a buy.

With so many positive developments reported during the month, it's easy to see why shares rose so much.

If the company can deliver on those results, I see no reason for Repligen's stock not to be able to continue its winning ways. Investors with a healthy appetite for volatility might want to put this stock on their radar.