Fox could enlist its breakout star to rescue its most troubled movie property, but the move would come with risks.

Deadpool is the reigning king of the 2016 box office, and the film's main character has quickly become the hottest thing in popular culture. The movie starring the eponymous character is a breakout hit for Twenty-First Century Fox (FOX)and has the potential to significantly bolster the strength of the company's film wing if leveraged properly. Fox's Deadpool might even be able to rescue the Fantastic Four.

The wisecracking mercenary in red has struck a major chord with audiences, scoring up more than $600 million in ticket sales roughly two weeks after release, and becoming an overnight cultural sensation. The massive success of the film naturally brings to mind questions of what's next for the character. Work on a sequel has already been confirmed, and the character is now solidified as a cinematic power house, but one of Deadpool's greatest abilities may rest in crossover potential.

Propping up struggling franchises through association with successful ones isn't a risk-less move, but Fox has the option of using Deadpool to salvage its Fantastic Four film license, and some manner of team-up is probably the best move the company can make to strengthen its weakest comic book property and avoid a scenario where it makes sense to sell the property back to Disney (DIS -0.01%). 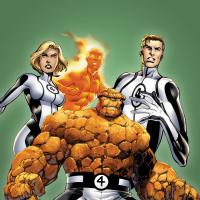 Put Deadpool in it and call the movie Fantastic Five
The pairing of Deadpool and the Fantastic Four might seem a bit odd at first. Deadpool is known for his foul-mouthed irreverence and over the top violence, while Reed Richards, The Thing, and the Storm siblings are known for having more family friendly, age-accessible adventures. But the apparent oddity of a big screen crossover between the two properties could actually add to the appeal and play to the strengths of the Deadpool character while mitigating the negative aspects associated with Fox's failed attempts to get the Fantastic Four to work on screen.

In the realm of cinematic failures, Deadpool and The Fantastic Four actually have some shared experience. Ryan Reynolds first portrayed Deadpool in 2009's X-Men Origins: Wolverine, serving as the chief supervillain in one of the least successful and least-loved films in the X-Men series. While Origins was broadly panned by critics and audiences, the Deadpool character received particular scorn, and the recent reinvention and subsequent rise to become one of the most valuable characters in comics has been unexpected to say the least. LIkewise, the Fantastic Four have fumbled on celluloid, turning in two mediocre performances in the mid-2000s before a recent super-flop in 2015. Fox had planned a sequel to its most recent Fantastic Four for 2017, but the film's disastrous reception sunk the outlook for the franchise.

Could the "Merc with a Mouth" save the Fantastic Four from being better off with Disney?
Fox needs to keep making films using the characters in order to prevent the film license from reverting to Disney and its Marvel wing, but high-profile failures with the characters have created a difficult backdrop for new Fantastic entries. If Fox is going to reboot the Fantastic Four on the big screen again -- and it seems they will despite past difficulties -- audiences might be more receptive to a comedic, self-referential take that can acknowledge previous missteps with a wink and a nod while laying new franchise groundwork. And who better to provide the meta-humor comedic relief in a Fantastic Four relaunch than Fox's new, red-suited superstar?

Deadpool gives Fox a chance to poke fun at conventional genre and character rules within a film and wrap seemingly disparate elements together in an entertaining package. A recent petition to have the character, and not actor Ryan Reynolds, host Saturday Night Live and a range of appearances in video games and animated movies suggest the character gets along just fine under greater constraint, so losing a bit of shock factor shouldn't do much to dampen the character's appeal.

Popular superhero licenses are a huge asset at the box office, and Fox probably has little interest in sending the Fantastic Four back to Disney if it believes the property is salvageable. At this point, using the draw of characters outside the franchise seems like the best way to buoy Fox's Four.

The benefits of teamwork
Fox can breathe a sigh of relief now that Deadpool is a certified megahit. The film should go on to record the highest global ticket sales in the X-Men series, despite its R-rating.

The movie's success takes a great deal of pressure off the company's upcoming X-Men: Apocalypse, and positions Fox's movie division to have a very strong year if the upcoming X-Men film and Independence Day: Resurgence perform well in the summer season. The Deadpool character has massive crossover appeal within Fox's superhero universe, and could not only be the perfect way to revive The Fantastic Four, but also cross Marvel's First Family into the X-Men continuity.

If Fox can get all of its superhero licenses to work together onscreen, it has the pieces to build a superhero universe that rivals what Disney has accomplished with the Marvel Cinematic Universe. Oddly enough, the once-laughed-at Deadpool is now one of Fox's greatest content assets, and he might just help the down-and-out Fantastic Four find a way to power up.

Keith Noonan has no position in any stocks mentioned. His superhero alter-ego, Livepuddle, is not nearly as popular as Deadpool, but the character is roughly twice as self-referential -- he's always talking about me. The Motley Fool owns shares of and recommends Walt Disney. We Fools may not all hold the same opinions, but we all believe that considering a diverse range of insights makes us better investors. The Motley Fool has a disclosure policy.