In a telling tirade, Sears CEO Eddie Lampert blamed the company's problems on the successes of young disruptors like Uber, Tesla, and Amazon, but the real blame clearly rests at his feet.

Surprising no one, Sears Holdings (SHLDQ) posted another disastrous earnings report last week. Same-store sales tumbled 7.1%, and the company reported a net loss of $580 million or $5.44 per share. Those numbers fit a pattern as net income has been negative for five years now and same-store sales have been falling for longer than that.

After spinning off assets including Lands End, a REIT under Seritage Growth Properties, and Sears Hometown and Outlet stores among others, the company has become a skeleton of its former self and the stock price has tumbled along with its performance. 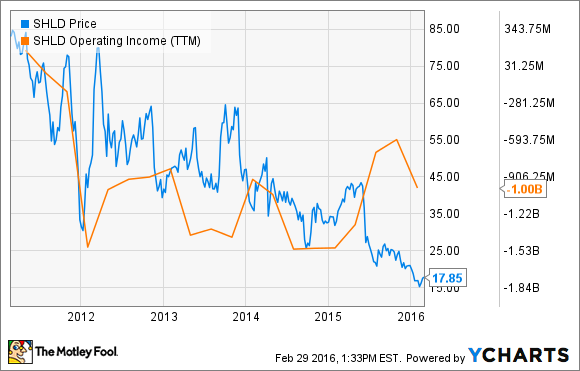 CEO Eddie Lampert has touted the company's rewards program and other initiatives to turn around the business, but none of them have shown any evidence of actually succeeding. Sears ranks near the bottom of virtually every retail performance metric available, including customer satisfaction.

In a letter to shareholders accompanying the earnings release, Lampert was sincere and direct in discussing the current retail landscape, but, strangely, he also invoked start-ups like Uber, Tesla Motors (TSLA 7.67%), and Amazon.com (AMZN 4.46%) in a rant about Sears not getting a fair shake.

It was a bizarre move, considering that Amazon is the only one of the three that could be considered in any way a rival of Sears. Lampert's unifying theory seemed to be: "These companies rely heavily on continued financing and favorable capital market conditions and valuations, while companies viewed through a more traditional lens, like Sears Holdings, are met with skepticism even though we have an enormous asset base and a proven history of monetizing these assets and raising additional capital to fund our obligations and transformation."

He complained that Uber had a valuation of more than $50 billion, despite losing more than $1 billion a year in China. On Tesla, he noted that the company's success has come in part due to government incentives and a regulatory environment that may be punishing traditional automakers. Similarly, he claimed that Amazon's dominance today owes much to its ability to ignore sales taxes in its earlier years.

But Lampert has to know the real reason why Sears isn't enjoying the sort of magical market multiples that Uber, Tesla, and Amazon do. These companies are disruptors, while Sears is one of the disrupted.

Uber has gained a $62 billion valuation without making a profit because investors assume that it will one day bring in billions. And why shouldn't it? The company is disrupting transportation in a way that no enterprise has since arguably Henry Ford's time. Uber isn't losing money because its business model is broken like Sears' is. It's operating without a profit because it's growing wildly, spending on marketing, infrastructure, hiring, and legal battles as it tries penetrate all corners of the globe.

Tesla, similarly, represents the best attempt yet at building pure electric vehicles that consumers will buy, a segment that should become increasingly desirable considering the rising threat of climate change and the limited global supply of fossil fuels.

And Amazon, finally, has come to dominate e-commerce because it spotted the opportunity early and has innovated and expanded with abandon. The company now collects sales tax on a majority of its transactions, undermining Lampert's argument. While the fact that it didn't have to collect those taxes for many years may have given Amazon an unfair advantage, there are greater reasons why it's grown its annual revenues to more than $100 billion and is threatening so many brick-and-mortar retailers. Those include the popularity of Amazon Prime, and the company's reputation for low prices, excellent customer service, and huge selection.

A crumbling empire
It's been nearly 12 years since Lampert merged a post-bankrupcy Kmart with Sears, fusing the fortunes of two retail dinosaurs. In that deal, Lampert saw real estate value as the key,  and he has managed the two chains as a value play ever since, ignoring the fundamentals of running a retail business. Under Lampert, the company chronically underinvested in store maintenance, spending as little as one fifth of what its rivals spent to keep stores clean and up to date. The result has been a customer exodus, as no one likes shopping in dilapidated stores.  Lampert's personnel management ideas weren't any better. An Ayn Rand fan, he split the company into more than 30 autonomous units, each with its own executives and board of directors, to boost "visibility and accountability." Instead, the divisions engaged in cutthroat competition and sabotage. Incentives were tied to the success of the individual divisions, which often came at the expense of other parts of the company.

With no end to its cash-bleeding ways in sight, billions in debt on its books, and a much thinner asset portfolio, Sears could declare bankruptcy in as little as two years, according to some analysts.

It's no surprise then, that Lampert seems envious of Uber, Tesla, and Amazon. Each of those companies took an idea and turned it into rapidly growing, multibillion-dollar business. Lampert, on the other hand, took a retail empire and turned it into a cautionary tale.

Lampert protests about fairness, but Sears' business model should be met with skepticism from investors. Ideas matter. And Sears is on the wrong side of the equation.

Jeremy Bowman has no position in any stocks mentioned. The Motley Fool owns shares of and recommends Amazon.com and Tesla Motors. We Fools may not all hold the same opinions, but we all believe that considering a diverse range of insights makes us better investors. The Motley Fool has a disclosure policy.