If the Great Depression is any indication, it will be a while before interest rates normalize.

One of the biggest questions on the minds of bankers, businesspeople, analysts, and commentators over the past two years concerns whether or not short-term interest rates will "normalize" -- that is, increase from where they are today to between, say, 3% and 4% at some point in the near future. But while many people seem to believe that rates will approach these levels soon, there's historical precedent to think that they could stay low for much longer.

The specific interest rate I'm talking about is the Fed funds rate -- that is, the rate at which banks lend excess reserves to each other on an overnight basis. This is the key interest rate benchmark in the United States the Federal Reserve uses to influence monetary policy. A high Fed funds rate, as the central bank implemented in the late 1970s and early 1980s to combat inflation, drives up borrowing costs and thereby weighs on economic activity. A low rate should theoretically achieve the opposite effect.

The issue we face now is that the Fed funds rate has been at or just above 0% since Lehman Brothers filed for bankruptcy in September 2008. Even after the Federal Reserve ratcheted it up by a quarter of a percentage point last year, it's still at a mere 0.34%.

If you use the common data source for things like this -- namely, the Federal Reserve Bank of St. Louis' invaluable FRED economic database -- you'd be excused for concluding that interest rates have never been this low for this long before. As evidenced in the chart below, the lowest they had been before seems to have occurred in 1958, the first serious economic downturn since World War II, when rates bottomed out at 0.63% in May of that year. But even then, they recovered quickly. It took only a year for the Fed funds rate to rise to 2.9%. 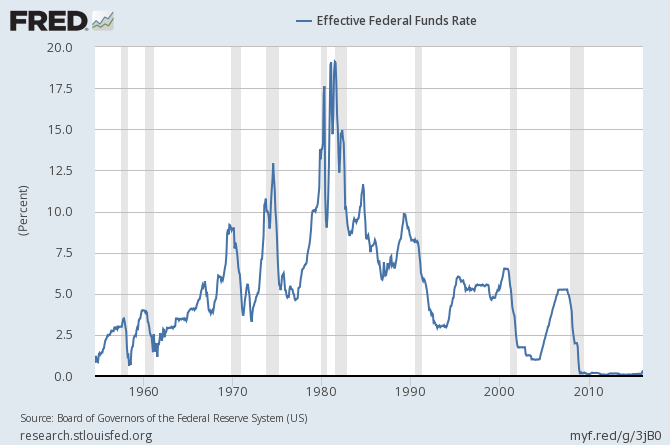 The problem with using this data, however, is that it doesn't go back far enough to capture the closest analogy to the financial crisis -- namely, the Great Depression. This was brought to my attention recently when reading a biography of Walter Wriston, the famed chairman and CEO of Citicorp, the predecessor to Citigroup, throughout the 1970s and into the 1980s. As author Phillip Zweig pointed out, the prime rate never rose above 1.5% from 1934 to 1947. Today, meanwhile, the prime rate is 3.5% at all of the major banks.

The prime rate is different than the Fed funds rate, as the former is the rate at which banks will lend to their most creditworthy corporate customers. But the two are closely interlocked, as the prime rate derives from the Fed funds rate -- the higher the latter, the higher the former, and vice versa. It can be deduced, in turn, that even short-term interest rates benchmarks during the Great Depression were lower for considerably longer (13 years) than they have been since the end of 2008 (roughly seven years).

This matters in the first case because it weighs on the profitability of banks. At its 2016 Investors Day, JPMorgan Chase said that it should earn $10 billion more a year in pre-tax net interest income once rates normalize. Bank of America has offered similar guidance. Under its assumptions, presented in its 2015 10-K, Bank of America will earn $4.3 billion more a year in pre-tax revenue if short and long-term rates increase by only 100 basis points, or one percentage point. For investors in banks, in other words, the timing and extent of an increase in rates goes to the heart of any investment thesis.

The second reason all of this matters is because higher rates, paradoxically, could very well spur economic activity. This shouldn't theoretically be the case, but it might be right now given corporations' unusual approach to capital allocation over the last few years. "U.S. companies went on a borrowing binge in recent years, wrote The Wall Street Journal's Justin Lahart. But "rather than investing the funds they raised back into their businesses, companies in many cases bought back stock instead."

This trend has allowed corporate earnings per share to continue growing. "Because those stock buybacks helped reduce companies' total shares outstanding, earnings per share got a boost," Lahart continued. "Indeed, absent the past three years' share-count reductions, S&P 500 earnings per share would have been 2% lower in the fourth quarter than what companies are reporting."

If you take low rates out of the equation, then, companies will have to figure out how to boost earnings per share using more traditional means -- that is, by investing in their businesses. Richard Davis, the chairman and CEO of US Bancorp, alluded to this on the bank's third-quarter conference call last year. As he sees it, higher rates will cause deposits to flee in search of higher yields and, more to the point, commercial customers to scurry at the last moment to lock in lower lending rates.

We're all going to have to get ready for this moment when deposits start to flow out of banks, and we should celebrate it, right? [Customers] are back up to a savings level now that hasn't been seen in 12 years. That's great for America, but now we want them to use [their deposits]. [...] Secondly, lines of credit that are already extended but not used -- get used, and then eventually new lines and loans start to happen. That's how the cycle reverses itself.

There's no guarantee, of course, that corporations would use the additional capital to invest in their businesses as opposed to repurchasing more stock. However, it seems reasonable to conclude that they would have no choice but to do so, as low short-term rates could no longer be relied upon in the future to artificially buttress their earnings per share by borrowing money to buy back stock. This would be good news not only for long-term investors, but also for the broader economy.

These benefits aside, it still remains to be seen if and when interest rates will "normalize." The bad news is that they stayed lower for much longer during and after the Great Depression. But the good news is that the financial crisis was caught by policymakers before things got that bad. This, at the very least, leaves room for hope that the Federal Reserve will feel comfortable enough at some point this year to continue on the path of higher rates that it cautiously started last year.