Please ensure Javascript is enabled for purposes of website accessibility
Log In Help Join The Motley Fool
Free Article Join Over 1 Million Premium Members And Get More In-Depth Stock Guidance and Research
By Bradley Seth McNew - Mar 7, 2016 at 10:00AM

Why the company's shares have dropped this year, they could be set for a rebound.

Royal Caribbean Cruises (RCL -3.08%) shareholders have weathered a tough storm already in 2016 as the stock has dropped around 25% since the start of the year. There are a few reasons that could be to blame, from a recent earnings miss to the Zika virus. Looking to the future, however, there are at least three reasons its stock could rise.

1. Growth in China
"China" was mentioned 63 times by management and analysts in the company's most recent earnings call, far more than any other region. China's population, around four times that of the United States, is not the only reason it could be such a lucrative market -- it also has a middle class that is expanding rapidly, as well as a long coast with many embarkation port possibilities.

Royal Caribbean is responding by sending more ships to China, setting up more booking agent offices, establishing hospitality schools in China, offering cruise dates year-round instead of just during the peak season, and embarking from more ports in the country.

In 2012, there were only 216,000 cruise passengers out of Mainland China. That number grew to nearly 700,000 in 2014, and Executive Vice President of the China Cruise and Yacht Industry Association Zheng Weihang predicts that will grow to 2.5 million by 2020.  As of the end of 2015, passengers in the Asia-pacific region made up only 23% of Royal Caribbean's total, but expect that number to grow in coming years.

2. New ships this year
Royal Caribbean introduced its Quantum of the Seas cruise ship in 2014 (which after one tour in the U.S. is now permanently stationed in China). Last year Royal Caribbean released another new ship, Anthem of the Seas.

This year, two new ships will set sail which could help to give the stock an added boost. Ovation of the Seas made its debut last month when it started sea tests before its maiden voyage in April. The cruise liner has many of the same features that made the Quantum of the Seas so popular, such as an extended arm over the top of the ship that gives passengers a 360 degree view of surrounding scenery. Ovation of the Seas will start in Europe before heading to Tianjin, China for the summer and then to Australia.

Royal Caribbean's next major ship, Harmony of the Seas, is expected to hit the water in June. It will be the world's largest and will include many of the Quantum class attractions as well as unique features like a "bionic bar," which is a full bar where robotic arms serve drinks to passengers, and an onboard water park with the world's longest on-ship water slide.

In 2014, Royal Caribbean management released a formal plan to double EPS and ROIC by 2017, a plan called "Double Double." In the most recent earnings call, Royal Caribbean CEO Richard Fain said that:

While I'm pleased to look back on the success of 2015, I'm eager to move on to 2016 and the great things to come. Our metrics indicate that we are still on course for our Double-Double targets. We remain in the solid booked position, roughly equal to last year's record levels and at higher rates.

Adjusted net income of 0.94 cents per share for the recently released fourth quarter actually missed analysts expectations which has helped to push the stock lower in recent weeks. However, the company is still on track to meet its aggressive Double Double goal by 2017, which if/when achieved will make the current stock price seem cheap.

The sell off looks overdone
By the end of last year, Royal Caribbean stock price had nearly tripled over the preceding three years. Even though the stock has been hammered in the last two months, much of that seems to be due to general market volatility more than any issue specific to Royal Caribbean. 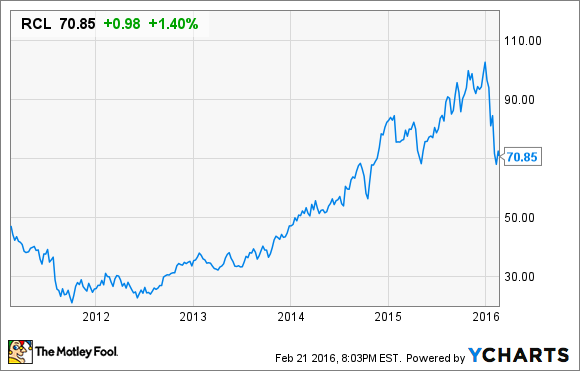 The sell off now seems overdone, which means this could be an attractive entry point for long-term investors. The stock currently trades for 24 times earnings, and just 10 times projected 2017 earnings. Compare that with the S&P 500, trading at an average of 24 times earnings.  With the growth in China, new ships setting sail, and the company on track to reach its aggressive Double Double goals by 2017, Royal Caribbean's stock price seems poised to grow.

The next billion-dollar iSecret
The world's biggest tech company forgot to show you something at its recent event, but a few Wall Street analysts and the Fool didn't miss a beat: There's a small company that's powering their brand-new gadgets and the coming revolution in technology. And we think its stock price has nearly unlimited room to run for early in-the-know investors! To be one of them, just click here.