Please ensure Javascript is enabled for purposes of website accessibility
Log In Help Join The Motley Fool
Free Article Join Over 1 Million Premium Members And Get More In-Depth Stock Guidance and Research
By Leo Sun - Mar 7, 2016 at 9:04AM

Baidu's forecast for 21% to 26% annual sales growth in the first quarter slightly missed the consensus estimate for 28% growth. But based on Baidu's post-earnings rally, investors didn't seem to mind the light guidance. I sold my shares of Baidu a few years ago, but the company's strong fourth quarter performance indicates that it might be time to rebuild a position. Here are my top four reasons to be bullish on Baidu in 2016.

1. Solid user and revenue growth
Last quarter, Baidu's number of online ad customers rose 6.1% annually to 555,000. That was a sequential decrease of 10.9% from 623,000 in the third quarter, but that decline was partially attributed to seasonal ad spending. That softness was offset by solid growth in revenue per online ad customer, which improved 9.5% sequentially and 17.4% annually to 31,000 RMB ($4,786).

Baidu's mobile search monthly active users (MAUs) rose 21% annually to 657 million. Mobile revenue accounted for 56% of Baidu's top line during the quarter, up from 42% in the prior year quarter. That consistent growth allays previous fears that Baidu would struggle in its transition to mobile devices.

The expansion of Baidu's O2O platform -- which integrates e-commerce, ticket sales, taxi hailing, and other services into its core app -- also widens its defensive moat against aggressive rivals like Tencent. Tencent already offers many similar O2O features in WeChat/WeiXin, the most popular messaging app in the country.

Baidu has also expanded its O2O ecosystem into the online travel industry to capitalize on the growth of Chinese tourism. Baidu originally owned a major stake in the travel site Qunar, but sold that stake to market leader Ctrip through a share swap deal last October. That deal enabled Baidu to gain a 25% stake in Ctrip instead of Qunar. Meanwhile, Ctrip's big investment in Qunar should halt the price wars between the two companies and boost profitability for both -- which will trickle back to Baidu's O2O platform. 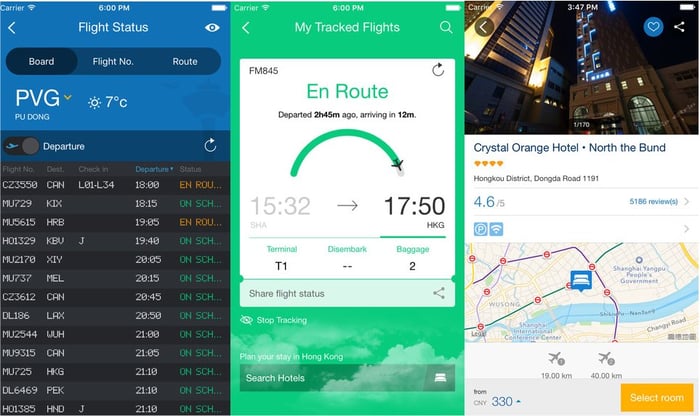 3. Slower cost growth
In previous quarters, Baidu's aggressive O2O expansion raised concerns about its rising expenses. Baidu's spending continued to rise in the fourth quarter, but at a much slower rate than before. Sales, general, and adminstrative expenses rose 28.9% to $699 million, a sharp decline from 111.2% growth in the previous quarter. Research and development expenses only climbed 16.4% to $383.9 milion, down from a 46.9% increase in the previous quarter.

Traffic acquisition costs inched up to 14% of revenue, compared to 13.4% in the prior year quarter, but operational costs fell from 6.3% to 4.4% of revenue, and content costs related to streaming video fell from 7.4% to 4.2% of revenue. Those lower expenses boosted Baidu's operating profit 20% annually to $545.7 million.

4. Still the best bet on China's search market
China has over 730 million Internet users, which is more than twice the population of the United States. However, China still only has about half the Internet penetration rate as the U.S. -- indicating that it could still add a few hundred million users over the next few years.

Baidu is well-poised to capitalize on that growth, since it controls around 70% of the Chinese search market. Baidu's closest rival, Qihoo 360 (QIHU.DL), isn't a viable option for investors anymore, since it agreed to be taken private last December. After that deal closes, its shares will be delisted from the NYSE.

Is Baidu right for you?
Baidu's numbers look solid, and its growth potential is vast. However, investors should be aware that more bad news from China might cause the stock to extend its 13% decline over the past 12 months. Therefore, investors interested in Baidu should probably average in with several smaller purchases over the next few months.

Leo Sun has no position in any stocks mentioned. The Motley Fool owns shares of and recommends Baidu. The Motley Fool recommends Ctrip.com International. Try any of our Foolish newsletter services free for 30 days. We Fools may not all hold the same opinions, but we all believe that considering a diverse range of insights makes us better investors. The Motley Fool has a disclosure policy.