Two big dividend stocks -- but only one is a buy.

For investors seeking growth, healthcare is a very attractive space. After all, with 10,000 baby boomers per day turning 65 from now through 2029, there are major demographic trends supporting greater use of healthcare services. And for new healthcare investors seeking dividends, the big pharmas -- with their diverse pipelines, broad reach, growing dividends, and stable business models -- are a particularly attractive group.

The biggest of the bunch are Johnson & Johnson (JNJ 0.29%) and Pfizer (PFE 0.34%). Both are steady, stable stocks that have a track record of growing their dividends (just look at the following chart) -- but one is clearly better than the other. 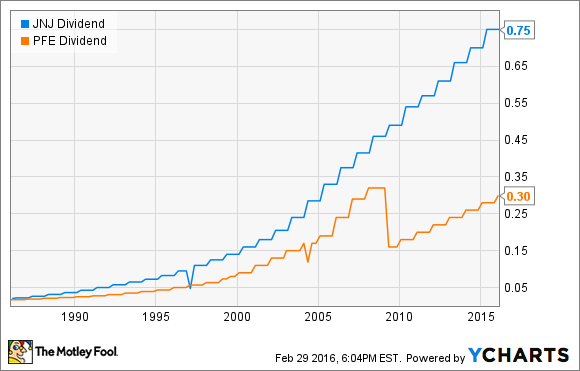 Johnson & Johnson: diversity meets stability
Johnson & Johnson is diversified across a number of different business lines, with only around 45% of 2015 revenue coming from pharmaceutical sales. About 36% comes from the company's medical device business, and 19% from consumer goods and OTC sales. While pharma is the standout growth driver of the group, growing 4.2% operationally year over year in 2015, with consumer goods up 2.7% and med devices down 1.4%, it's still a great thing that the company isn't wholly, or even primarily, reliant on pharma. After all, those slow-but-steady segments help provide stability in contrast to pharma's rollercoaster of drug approvals, failures, and patent expirations.

It is this diversity and underlying stability that has helped Johnson & Johnson pay steadily growing dividends for over 50 years, making the company one of an elite handful of dividend aristocrats -- companies that have grown their dividends annually for at least 25 years.

Cancer drugs Imbruvica and Zytiga continue to post nice gains for J&J, with Imbruvica selling $235 million in Q4 of 2015 -- getting it near a $1 billion annual run rate for J&J -- and Zytiga holding up well to increased competition from Medivation and Astellas' Xtandi, with 5.3% operational growth and overall bringing in nearly $600 million for the quarter. Blood thinner Xarelto grew 15.4% to $494 million for the quarter as well. And while Remicade remained J&J's biggest drug at $1.7 billion and hardly grew at all -- about 3.8% operationally -- the company is working hard to further diversify its pharma pipeline.

And with a variety of interesting drugs on the potential approval list over the next few years, J&J looks likely to succeed in just that. Two big ones to keep an eye out for: daratumumab for double refractory multiple myeloma and imetelstat for myelofibrosis. Analysts project blockbuster potential for both if approved, with daratumumab at $3.7 billion in annual peak sales and imetelstat at over $1 billion.

Pfizer: revamping for the future
Pfizer is heavily pharma reliant, which gives the stock more risk -- but also a little more pizazz. It has a slew of recent drug approvals doing very nicely on the market. For example, Ibrance for breast cancer achieved $315 million in sales in Q4 of 2015 and over $700 million during the year, despite only being approved in February. That implies at least blockbuster potential for the drug in 2016, its first full year on the market. And autoimmune drug Xeljanz posted 66% year-over-year growth to $172 million in 2015's fourth quarter. Pfizer's extensive pipeline includes dozens of drugs in trials, perhaps foremost among them bococizumab, a PCSK9 inhibitor to help control cholesterol, which has multibillion-dollar annual sales potential.

Pfizer has also invested heavily in beefing up its business for a possible future split. The 2015 purchases of biosimilar player Hospira and botox maker Allergan plc will ultimately lead to significant economies of scale in generics and a number of branded drugs, which will then give management the flexibility to decide whether to keep the company together or split into two well-scaled businesses -- probably one focused on branded drugs and one with a number of legacy drugs and generic/biosimilar opportunities. If drug approvals continue to roll in and the split ends up unlocking value, then the business (or businesses, I suppose), would clearly benefit.

But when it gets down to it, the better choice is clear
J&J has a management team that's executing on its current strategy, instead of potentially splitting because it hasn't been able to run the overall business effectively. J&J has a longer and more robust history of dividends. You have a company here whose diversity has enabled it to be a steady, slow-growth behemoth. I'm not saying that Pfizer is necessarily a bad stock, but it doesn't compare with J&J.