Learn about one of the biggest capital return programs currently on the stock market.

Since 2010, Procter & Gamble (PG -0.41%) has returned $60 billion to shareholders through dividends and stock buybacks -- at a pace of about $12 billion annually. On top of the sheer size of that windfall, the number is impressive given that the company hasn't cracked $12 billion of annual profit in any one of those years.

Rather than step back from that aggressive capital allocation pace, P&G aims to kick it into overdrive. Management plans to deliver $70 billion, or almost $18 billion per year, to shareholders through fiscal 2019. This is how executives plan to fund that epic cash return.

Cost cuts
While the company is aiming for sales growth, it isn't expecting particularly strong results on that metric anytime soon. Organic sales should be flat in fiscal 2016 for a further slowdown from last year's disappointing 1% growth.

That puts most of the earnings growth pressure on the cost cuts that are already adding billions of dollars to the bottom line. Annual cost of goods expenses are down by $6 billion in the last few years and on target to reach $7 billion by the end of this fiscal year. 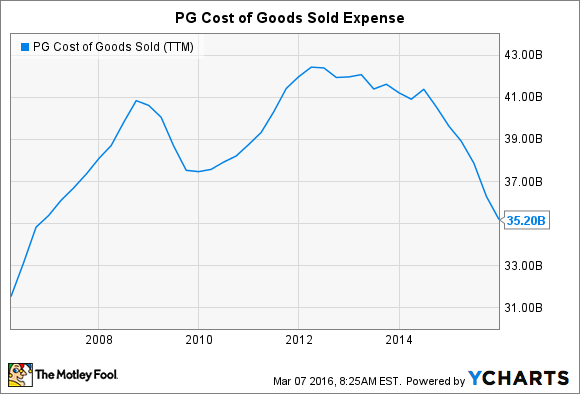 In addition, Procter & Gamble has squeezed extra efficiency out of other areas of its business -- everything from the supply chain to overhead and advertising spending. For example, despite increased support behind its biggest brands like Pantene and Tide last year, the company sliced $400 million out of marketing costs by reducing the number of agencies it works with by 40%.

While they have been masked by unfavorable currency, these cost cuts are starting to boost the bottom line. Core earnings rose 9% last quarter (compared to a 2% decline in fiscal 2015) as adjusted operating margin jumped by almost four percentage points.

Portfolio reboot
The rest of the money will come from Procter & Gamble's portfolio transformation, which involves shedding underperforming product lines to get the company down from 166 brands to just 65. That massive shift promises to raise cash in two major ways.

First, the company will get a one-time boost from the sale of the businesses it chooses to divest. Between just two deals, the collection of beauty brands going to Coty and the Duracell battery business going to Berkshire Hathaway, the company will raise about $16 billion.

On an ongoing basis, management believes the smaller company that remains will generate nearly the same level of profit but at a lower sales level. At the same time, the new P&G should grow faster by about one percentage point of organic sales gains. That would mark a major improvement, considering that growth was just 1% in the most recent fiscal year.

Can P&G do it?
Looking simply at revenue and profit growth trends, it doesn't seem likely that P&G could manage $70 billion of capital returns over the next four fiscal years. But those headline figures have both been temporarily held back by currency swings and divestments. Instead, investors should focus on cash flow to get a clearer picture of the company's financial health. That metric is at an all-time high right now, with operating cash running at $16 billion per year. In fact, last quarter's $4 billion result represented well over 100% of net earnings for the period.

At that pace of cash flow growth, and with the help of nearly $20 billion in extra funds from brand divestments, Procter & Gamble should be able to afford sending $70 billion (representing almost one-third of its market capitalization) back to shareholders in the next few years -- while still making hefty investments in its business.

Demitrios Kalogeropoulos has no position in any stocks mentioned. The Motley Fool recommends Procter & Gamble. We Fools may not all hold the same opinions, but we all believe that considering a diverse range of insights makes us better investors. The Motley Fool has a disclosure policy.