The owner of air-conditioning company Trane has a growth opportunity in catching up with its rivals' operating margins.

It's been a pretty good year for companies exposed to the North American heating, ventilation, and air-conditioning (HVAC) market. As you can see in the chart below, the "purest" plays, Lennox International (LII 2.60%) and Ingersoll-Rand Plc (TT 1.16%), have both outperformed. Ingersoll-Rand is favored with relatively good HVAC markets, and it has a margin expansion opportunity that could drive growth in 2016. Let's take a closer look. 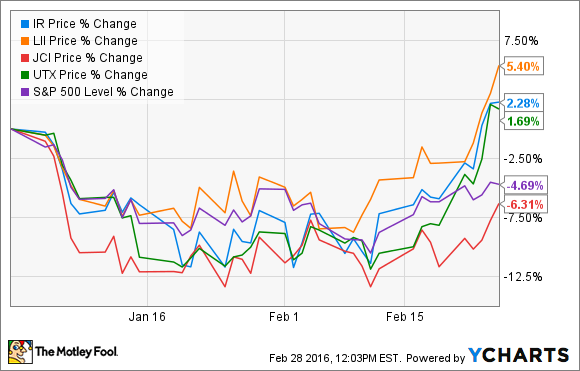 Ingersoll-Rand
The company generates 75% of its revenue from its climate segment (Trane and American Standard HVAC and Thermo King transport temperature control solutions), and as you can see below, it's the key to growth prospects in 2016.

Moreover, management's guidance for 2016 assumes 3% to 5% local currency revenue growth for climate, while the industrial segment (an assorted collection of industrial businesses that even includes golf vehicles) is forecast to deliver revenue growth from negative 1% to  positive 1%. 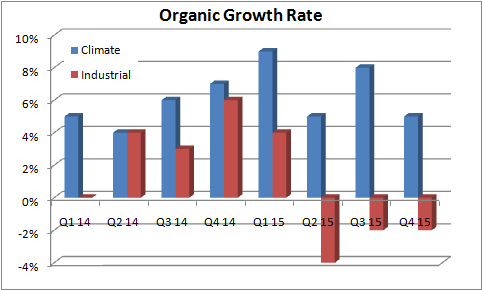 However, it's the margin expansion opportunity that counts for 2016. The climate segment's adjusted operating margin was 12.9% in the fourth quarter compared to 12.2% in the same period last year, and management forecasts climate segment margin of 13.25% to 13.75% for 2016.

As you can see below, the climate segment has driven overall margin improvement in the last five years. 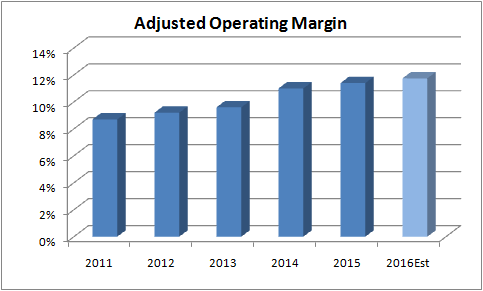 Compared to peers?
It's difficult to make an apples-to-apples comparison because each company below has other businesses within their reporting segments. Nonetheless, HVAC is by far the most important business in each -- so it's still a useful guide to where margins can go. United Technologies (RTX 0.95%) has substantive HVAC operations, but it's not the company's primary earnings driver -- that honor falls to a combination of aerospace (including Pratt & Whitney) and Otis elevators.

Clearly, Ingersoll-Rand has an opportunity to play catch-up, and closing the margin gap could lead to good earnings growth in future years.

Operating leverage
Now, I know what you might be thinking, but you'd be wrong. Operating leverage is a relatively easy-to-understand piece of financial jargon. It simply refers to how much income increase a company can make given a set increase in revenue.

In addition, if Ingersoll-Rand can increase its long-term margin, then its operating leverage should increase as well. The question is: What's the industry and revenue outlook for 2016?

What the industry is saying
Following the recent earnings season, the leading players updated their guidance. Ingersoll-Rand is predicting low-single-digit growth in residential HVAC and mid-single-digit growth in commercial HVAC (its primary end market) -- as we saw earlier, this results in 3% to 5% local currency revenue growth for 2016.

Meanwhile, Lennox International (a company that generates 60% of its profit from residential operations) forecasts mid-single-digit growth in North America residential units, with North America commercial growth seen at low single digits in 2016. Lennox is a stock worth picking up for those bullish on the U.S. housing market.

The bottom line
In short, despite a weakening global growth environment, the HVAC market remains in growth mode, and Ingersoll-Rand's operating leverage means it's an attractive stock. Moreover, the long-term margin growth opportunity in its climate segment gives it growth prospects for years to come, even if the economy only grows moderately.