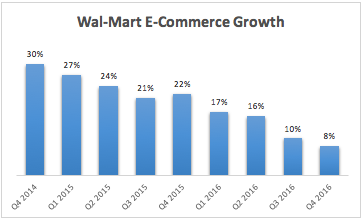 As much as Wal-Mart (NYSE:WMT) tries to boost its online business, the retail giant continues to lose ground to competitors. Amazon(NASDAQ:AMZN)is the obvious winner in the online retail business, but Wal-Mart is struggling to even keep up with Target (NYSE:TGT). The latest four quarters from Target's digital business, beginning with the most recent holiday quarter, showed annual growth of 34%, 20%, 30%, and 38%, respectively.

The declining growth isn't for a lack of effort. Let's take a look at some of the failed initiatives the company has implemented to ignite its e-commerce business.

If Wal-Mart was looking to make a splash with its answer for Amazon Prime, it's not doing a very good job. Last June, Wal-Mart announced a service offering free 3-day shipping for $50 per year. As of this writing, Wal-Mart is promoting over one million products as being available for shipment. Amazon offers its Prime service for $99, provides free 2-day shipping, and access to over 20 million physical items. Prime members also get access to video streaming, over 1.5 million songs, 800,000 free books, and unlimited photo storage.

In fairness to Wal-Mart, Shipping Pass is still in the testing phase and only available in limited markets. However, given that Amazon Prime membership grew 51% globally and 47% in the US in 2015, it may be too little, too late for Shipping Pass.

Wal-Mart doesn't offer 2-day shipping to match Amazon and has a higher order threshold than Target for free delivery. In order to have a meaningful chance at taking online retail market share, Wal-Mart would need to be more aggressive with both the minimum order amount for free delivery and the number of days it takes to complete a shipment, especially since Amazon offers free same-day shipping in some markets and one-day shipping for as low as $2.99.

It also says something that Prime is in its 11th year of existence, while Wal-Mart is in the pilot stage of a similar offering. While Wal-Mart is testing its service, Amazon is building increasing loyalty with its Prime subscribers.

Holiday promotions
Not only was Wal-Mart one of many brick-and-mortar retailers to open on Thanksgiving Day, but it also kicked off Cyber Monday a day early. The reasoning behind the change was that consumers have fast Internet at homes and no longer need to wait until getting into the office on Monday to do their shopping.

Amazon, on the other hand, began running special deals a week prior to Black Friday. New deals were offered every five minutes for an entire week.

The results of Wal-Mart's efforts can be seen in the earlier chart as Wal-Mart achieved only 8% online growth over the 2014 holiday quarter. Meanwhile Amazon achieved over 15% revenue growth in product sales and 22% in total revenue. Target grew its online sales 34% during the holidays.

Investing in e-commerce
Wal-Mart invested about $900 million building out its e-commerce business last year. The company's original plan called for $1.2 billion to $1.5 billion. Next year, the company plans to spend $1.1 billion on e-commerce.

Not only is Wal-Mart under-investing against its own guidance, it is barely keeping up with its closest competitor.

In an analyst call on Wednesday, Target announced it will spend $1.8 billion this year and $2.5 billion next year on capital expenditures, with the bulk of its investment going into the supply chain and technology. Another sign that Target is taking technology and e-commerce seriously is its recent hire of Arthur Valdez for executive vice president, chief supply chain and logistics officer. Mr. Valdez spent 16 years at Amazon where he held multiple leadership positions focusing on the company's global supply chain.

Wal-Mart owes much of its success the last three decades to being an innovative leader in technology. In the book, Made In America, Wal-Mart founder Sam Walton wrote extensively about innovative promotions that helped Wal-Mart become what it is today. However, judging by the decline in e-commerce growth, Wal-Mart appears to have lost its innovative touch.