The digital coupon company's terrible guidance for 2016 suggests that a turnaround is not happening anytime soon.

What: Shares of digital coupon site RetailMeNot (SALE) slumped 11.2% during February, according to data provided by S&P Global Market Intelligence. The company managed to beat analyst expectations for both revenue and earnings when it reported its fourth-quarter results on Feb. 9, but disappointing guidance sent the stock tumbling.

RetailMeNot also beat analyst estimates for earnings, reporting non-GAAP EPS of $0.36, $0.08 higher than analysts were expecting. Despite the earnings beat, non-GAAP EPS still declined by 16.3% year over year, and GAAP EPS of $0.17 fell 34.6%. Lower revenue and higher costs led to the steep decline in earnings.

While RetailMeNot did better than analysts were expecting during the fourth quarter, the company's guidance came up short. RetailMeNot expects revenue to decline by 15% year over year during the first quarter at the midpoint of its guidance, with a 7% decline expected for the full year. Analysts expected substantially higher revenue guidance in both cases.

Now what: RetailMeNot grew very quickly in the years leading up to its 2013 IPO, but both revenue and earnings per share peaked in 2014. The company's fourth-quarter results, while better than expected, were still lackluster, and guidance calling for a steep decline in revenue brings into question whether RetailMeNot's growth story remains intact. 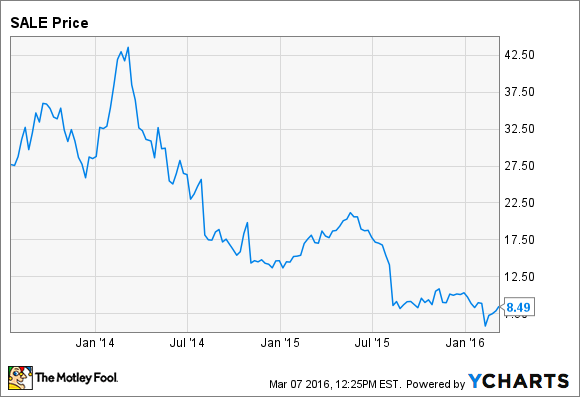 Since peaking in early 2014, shares of RetailMeNot are down more than 80%. Management sounded optimistic about the company's future, with CEO Cotter Cunningham pointing to investments in mobile, expanding offer content, and leveraging data as key drivers of long-term growth. But with the company's revenue decline expected to accelerated in 2016, a turnaround doesn't seem imminent.

Reasons To Sell a Stock #1: Thesis Is Not Intact

Why Shares of RetailMeNot Inc. Crashed on Wednesday