Shares tumbled despite the company reporting two positive developments during the month.

What: Shareholders of Teligent (TLGT), a small-cap specialty generic pharmaceutical manufacturer, had a rough February as the company's stock dropped 18.5% during the month, according to data from S&P Global Market Intelligence.

So what: It's a bit of a mystery why shares plunged so much as the healthcare sector in general held up quite well over the same time frame. For example, the Vanguard Health Care ETF (VHT 0.28%), an exchange-traded fund that holds 345 stocks of all sizes that operate in the healthcare sector, only dropped by 0.80% during the period. 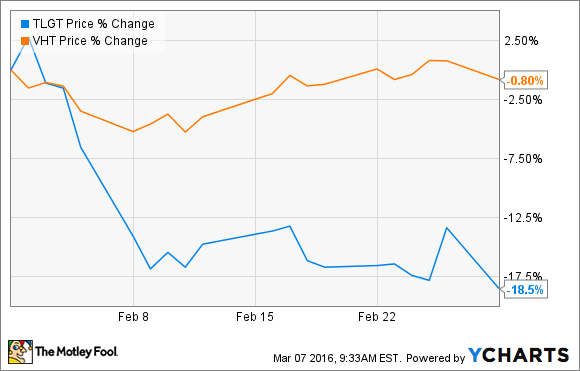 With such a big hit to the share price, you might assume that something bad happened at the company, but in fact, Teligent actually shared two pieces of good news with investors during the month:

Beyond the news of these two approvals, SEC filings revealed that several investment funds either initiated a new position or added to their existing stake in the company's stock during the month.

And yet, despite everything listed above, the stock still tumbled.

Now what: Teligent currently counts 12 products on the market that are offered to its patients in a few dozen formats, and another 31 products in its pipeline are currently pending regulatory approval. All told, it estimates that current backlog of products have an addressable market opportunity worth roughly $1.4 billion.

Fourth-quarter earnings results will be released this Wednesday after the market closes, and it has surprised investors on the upside in three of its last four reports. If the company can do so once again, it wouldn't surprise me to see the stock recover from the drubbing it took in February and start heading in the right direction again.

Here's Why Teligent Stock Was Cut Nearly in Half Today

The 3 Best Pharmaceutical Stocks to Buy in 2017

3 Little-Known Pharmaceutical Companies to Put on Your Radar
376%