The oncology, and narcolepsy drugmaker has plenty of catalysts to keep you awake this year.

Over the past 12 months, Jazz Pharmaceuticals (JAZZ 0.61%) stock has fallen along with the Nasdaq Biotechnology ETF (IBB 0.05%). 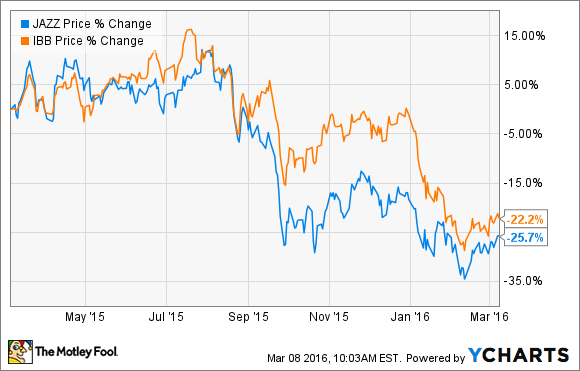 Public outcry over rising prescription drug prices is largely to blame for the losses seen in the biotechnology index (and across the whole sector). The correlation of Jazz stock with its index is easy to understand. A large part of Jazz Pharmaceuticals' revenue is derived from sales of its sleep disorder drug Xyrem, which grew 23% to $955 million last year. Although the number of patients using the drug has grown to an all-time high, its price has risen much faster, putting it directly in the political crosshairs.

Investors can look forward to a handful of incoming catalysts that could lift the stock, and reduce its reliance on raising the price of Xyrem. While I always encourage investors to take the long view, all three stock price catalysts could occur within the year.

1. Inter partes review results
Xyrem is covered by 20 U.S. patents that expire between 2019 and 2033. While that sounds like an ironclad grip on exclusivity, questioning the viability of these patents has been a tremendous source of income for patent lawyers working with several companies seeking FDA approval for generic versions of the narcolepsy therapy.

You could spend days sorting through legal proceedings regarding Xyrem patents, but one thing you need to know is this: If the PTAB rules in Jazz's favor, the source of 73% of the company's sales last year will be more secure going forward. That might not lead to terrific stock gains, but it couldn't hurt.

2. Defibrotide decision
While Xyrem's success is certainly welcome, being heavily dependant on a single drug's exclusivity is ill-advised. About two years ago, Jazz made a big step toward diversification by acquiring Gentium along with defibrotide. Marketed as Defitelio in some, but not yet all, European countries for treatment of deadly veno-occlusive disease in post-stem-cell transplant patients, the drug brought in 5% of the company's total sales last year, or about $70.7 million.

The life-saving treatment could further reduce reliance on Xyrem, beginning this spring. Defibrotide is not yet marketed in the U.S., but the FDA is currently reviewing its application for a similar indication. Back in 2011 the agency rejected the drug. Given the extensive clinical and real-world data available this time around, I'd say its chances of approval are looking pretty good. If given the green light, U.S. sales of defibrotide should lead to healthier long-term gains.

3. JZP-110 results
While defibrotide's U.S. fate could be decided any day now, phase 3 results for Jazz's narcolepsy and obstructive sleep apnea candidate, JZP-110 should be available at the end of the year. If the results are positive the company expects to file a new drug application soon after.

Success in narcolepsy would give about 25,000 patients that respond poorly to existing treatments a much needed option, but obstructive sleep apnea is a much larger indication. Jazz estimates between 150,000 and 275,000 obstructive sleep apnea patients respond inadequately to existing therapies.  With such a large addressable population, if approved, sales of JZP-110 could eventually surpass Xyrem.

Narcolepsy sure, but sleep apnea?
So far the drug's ability to reduce excessive daytime sleepiness in patients with narcolepsy is impressive. In a phase 2b trial after just four weeks JZP-110 significantly increased the average time to fall asleep to 9.5 minutes, while those on placebo took just 1.4 minutes. After 12 weeks the results were even better with patients on JZP-110 averaging 12.8 minutes to fall asleep, versus 2.1 for those on placebo. Although not compared head-to-head, JZP-110's phase 2b results in narcolepsy appear somewhat better than those that led to Xyrem's approval. I wouldn't be surprised if the larger phase 3 trial is a slam dunk for narcolepsy, and if approved shores up Jazz's market position in this space.

What concerns me is the lack of data in the larger obstructive sleep apnea indication. The phase 2b involved just 93 narcolepsy patients, none had OSA. And the company it purchased the drug from, Aerial BioPharma, hadn't tested the drug in OSA patients either.

Jazz is actually running 3 separate phase 3 trials with OSA patients. Investors will want to watch closely for the first OSA results for JZP-110 from a six-week withdrawal trial that should have top-line data available this May. A bit further ahead, a 440 patient trial with four separate dosage arms and one placebo group should have some data to report in September. Finally a one-year safety study should wrap up next summer.

Going forward investors Jazz investors will want to pay close attention to JZP-100's safety profile, especially regarding withdrawal symptoms, and tendency for abuse. If more favorable than existing stimulants for the sleep apnea population this could become a blockbuster. That's something worth paying attention to.

Why Shares of Invivyd Jumped This Week

Why Shares of Savara Soared This Week

Will This Billion-Dollar Acquisition Be a Smart Move for Merck?
401%