Here's what could go right for MetLife in a potentially transformative 2016.

What will it take for MetLife to turn it around this year? Here are three possibilities.

Most systemically important financial institutions are, not surprisingly, banks. However, there are a few non-bank SiFi's, including MetLife.

Over the past year, these non-bank SiFi's have been working to shed their designation as systemically important. MetLife initially tried suing the government, but a year later that path hasn't yielded any results.

General Electric, another non-bank Sifi, took a different tact. Last spring, GE announced plans to wind down its once powerful financial subsidiary, GE Capital. By selling off GE Capital's assets, GE would be able to escape the SiFi designation and avoid the regulatory burden that comes with it.

That plan of attack has thus far been successful, prompting other non-bank SiFi's to follow suit, MetLife among them. MetLife announced plans to divest businesses that represent upwards of 20% of its operating earnings.

Of the systemically important insurance companies in the U.S., American International Group is the only one not currently pursuing a strategy to shed the "SiFi" designation, despite strong shareholder pressure to follow suit.

The markets have thus far been supportive of the strategy. GE announced the plan to dismantle GE Capital in April, and since that time the company's stock has risen 20.5%. That's considerably better than the S&P 500's 4.4% decline over the same period.

MetLife is making progress of its own in a similar way. Its stock jumped 8% on the announcement of the divestitures, and on Feb. 29, when the company announced the sale of its U.S. retail advisor group to MassMutual for just over $300 million, the market responded by sending its stock up over 5%.

If MetLife is able to continue shedding assets at appropriate valuations, steadily streamlining the business and unlocking value for shareholders, I expect it will eventually shed the SiFi designation. I think that could very likely send the stock much higher. 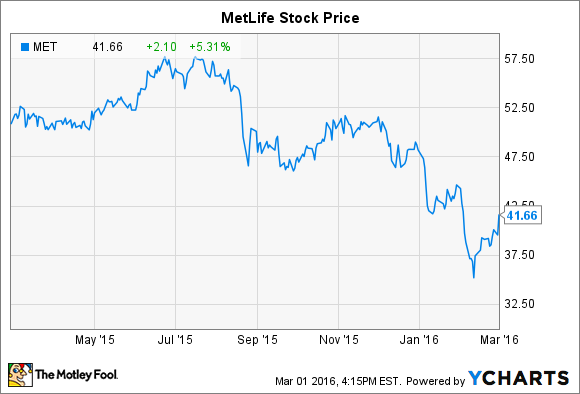 Before MetLife announced its plans to shrink itself, the company was an avid purchaser of company shares. In the fourth quarter of last year, the company bought back $817 million of shares. It bought an additional $70 million in the 2016 first quarter before the announcement. On top of that, MetLife also has a current dividend yield of 3.74%.

However, because of the uncertainty related to the company's planned divestitures, share buy backs have been suspended.

As the year progresses, it's likely that MetLife will resume its dividend purchases in some form, depending on the final outcome from the asset sales. Buying shares back at such a high volume has the effect of boosting the stock price both due by decreasing the supply of shares outstanding and by increasing the demand for shares through the company's buying.

The company's core business could recover from a tough 2015
MetLife's 2015 financial results were materially worse than the numbers reported for 2014. If that were to reverse, the stock could rise. 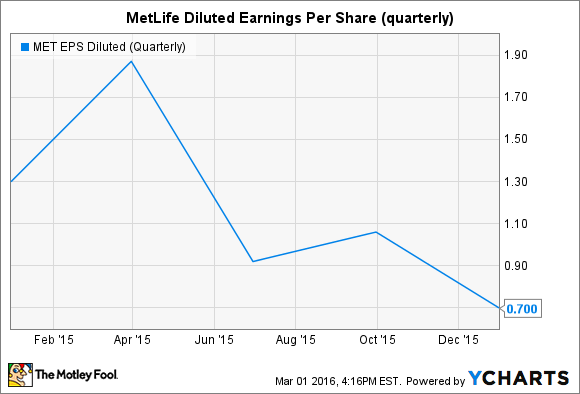 However, it seems reasonable that 2016 could see a reversal of this fortune. For example, the largest driver of the tough 2015 performance was lower variable investment income, the account where MetLife reports returns from alternative asset classes. These returns are more volatile than other investments, but have provided strong income for the company over the long term.

The decline in variable investment income will rise and fall over time, making this year's performance less significant for long term investors. Likewise, changes in currency exchange rates will also fluctuate and do not reflect the business' true performance in its various subsidiaries and regions around the world. If either of these trends turn in favor of MetLife in 2016, the stock could rise.

Focus on what matters
There are plenty of other reasons MetLife stock could rise in 2016. However, the elephant in the room is the company's plan to divest assets, streamline operations, and shed the SiFi designation.

This will be the dominant storyline for MetLife for the foreseeable future, and nothing else will have the same level of influence on the company's stock, higher or lower.