Just because the market tumbles doesn't mean your stock portfolio has to.

When the stock market crashes, most companies and their stocks crash with it -- just look at the mess in 2008 and 2009. However, there are some defensive stocks in the market that can help you weather the storm, or even profit from it. Here are three suggestions from our contributors that can help your portfolio do just that.

Matt Frankel: To insulate yourself from the effects of a market crash, you need to look for buisnesses that not only retain their revenue during tough times, but also do even better. One excellent example is Wal-Mart (WMT -0.73%).

Sure, Wal-Mart hasn't delivered excellent performance lately and after a recent rebound is still down by more than 21% over the past year. This is due to a variety of factors, such as fears that increasing wages will cut into Wal-Mart's profits, as well as the general downward pressure in the market, among other reasons.

However, when times get tough for the U.S. economy, Wal-Mart shines. Just look at Wal-Mart's performance during the financial crisis. Not only did Wal-Mart's revenue and earnings not decline, but it also increased during the tumultuous period from 2008 to early 2009. As a result, Wal-Mart's stock price at the March 2009 lows of the S&P was higher than it had been when the market was hitting its 2007 highs. 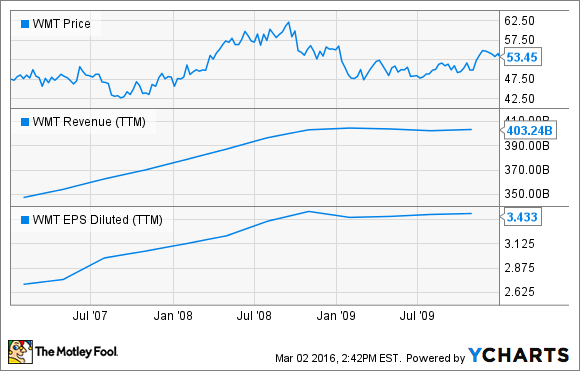 How can this be? Simply put, Wal-Mart is a truly recession-proof business. Sure, Wal-Mart's current customers tend to cut back during tough times, but shoppers who usually choose higher-end retailers will begin to do their shopping at Wal-Mart in order to save some money. Wal-Mart has a business model that works in good times, and works even better in the bad times and therefore is an excellent defensive stock.

Dan Caplinger: One stock that has a proven track record of holding up well during a market correction is fast-food giant McDonald's (MCD 1.40%). During the 2008 financial crisis, McDonald's was one of the few stocks that actually gained ground, and its nearly 9% total return ended up outperforming the S&P 500 by more than 45 percentage points.

The explanation is fairly simple. McDonald's is a go-to location for people on a budget, and many consumers trade down from higher-priced fast-casual chains when the economy is on the skids. In addition, McDonald's has a fairly loyal customer base, and that helps the company preserve profits even when finances are tight.

One potential downside of McDonald's is that it has tended to lag broader benchmarks during bull markets. From 2012 to 2015, for instance, the stock stagnated on fears that it wasn't effectively competing against rivals that had a stronger reputation for food quality.

Nevertheless, McDonald's hasn't given up on growth prospects. The recent arrival of all-day breakfast has reinvigorated the stock, and it could help support the company even in a future correction.

Not all corrections occur due to economic troubles, but when they do, McDonald's is a logical pick to hold up better than the overall market. Its resiliency to tough economic times has helped it outperform in the past and should continue to do so in the future.

Jason Hall: I'm going to take a different approach here, and instead of suggesting a stock that could go up in a crash, I'll tell you about a business that has shown itself to be both incredibly resilient and a great investment overall: VF Corporation (VFC -6.40%).

VF is the name behind some of the best-established and most iconic clothing and apparel brands out there, including Vans, Wrangler, The North Face, Timberland, and more. Since many of its brands tend to transcend fashion trends, its business has proved to be as durable as they come. Furthermore, many of those brands are staples for many wardrobes and less likely to be affected by recessions than pricier brands that rely on fashion trends.

VF's shares have underperformed the recent market downturn, but the key is resilience. During almost every major market slump in the past 30 years, VF's shares have fallen in the short term but have outperformed the market over two or more years starting from the pre-crash peak. Even better, long-term investors in VF have simply crushed the market: 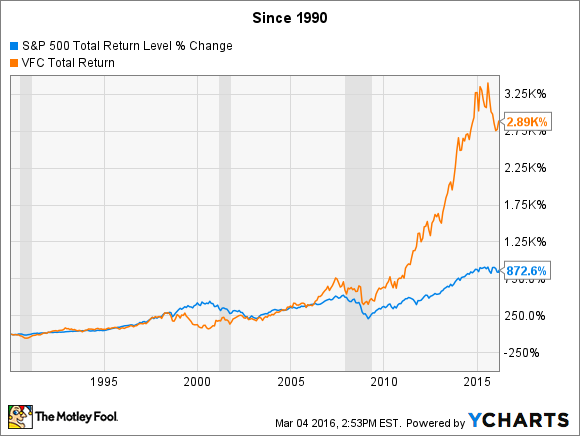 Stocks that can do well in a crash are nice, but stocks that quickly bounce back, and then do well when the market isn't going down are even better: 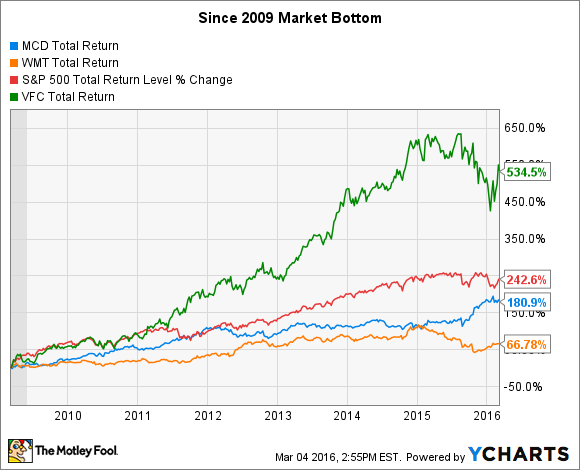 VF has proved to be both resilient shortly after a crash and a wonderful investment the rest of the time. Since there's no way to predict when the next market crash will happen, it may be smarter to focus on the best investments for any market condition. VF should be on your short list.

These 3 Stocks Should Be in Every Retirement Portfolio
413%