Demand for detachable tablets is growing, thanks to Microsoft Surface.

You don't hear this too often these days, but Microsoft (MSFT -0.26%) was on to something. At a time when the software giant's army of third-party OEMs were trying their darnedest to innovate new form factors, releasing increasingly bizarre devices, Microsoft came out with the Surface in 2012. Not only did Surface represent a major strategic shift for Microsoft -- a shift that some OEMs weren't all that happy about -- but the new device was also a big bet on a new form factor: tablets with detachable keyboards.

To be clear, there were other examples of detachable laptops that came before the Surface, but they never really made sense until the platform operators came out with tablet operating systems optimized around touch. Sure, Windows RT and Windows 8 were disasters, but Microsoft executed quite well on the hardware front, and now demand for detachables is on the rise.

Detachables demand is growing
Market researcher IDC has just put out some estimates, and while the global tablet market is expected to contract by 6% this year to 195 million units, detachable devices are expected to help the market resume growth the following year. For reference, there were an estimated 16.6 million detachable units shipped last year. That figure is expected to soar to 63.8 million by 2020.

Let me be clear about something: I've never put a lot of weight into long-term forecasts like this, since technology and consumer preferences can both change so quickly. You might remember when everyone thought netbooks were all the rage, but then tablets came along and put a quick stop to that storyline. But there's still reason to believe that IDC will be right directionally, even if the specific figures end up playing out differently.

It's also difficult to argue with the Surface results that Microsoft is putting up. Revenue continues to march higher, albeit subject to fluctuations from seasonal factors and new product launches. 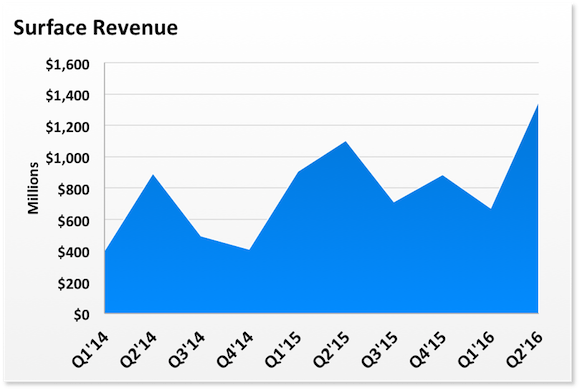 Not quite a detachable
Consumers appear to be shifting their preferences toward detachables, since it's conceivable that a detachable tablet can replace both a laptop and a stand-alone tablet.

For the first time, Apple is earnestly trying to position an iPad as a potential laptop replacement. The Mac maker had never really focused here, believing that Surface was a "compromised" device, but then iPad Pro could arguably also be compromised in some of the same ways since it seeks to replicate the value proposition with the Smart Keyboard accessory.

But an iPad Pro combined with a Smart Keyboard might qualify in practice, and for what it's worth IDC does include the iPad Pro in its detachables category. Apple is optimistic about the iPad Pro's prospects in the enterprise market thanks to its productivity features.

However, Microsoft does have an advantage here. With a detachable device, having an operating system that dynamically switches between tablet and desktop mode, like Windows 10, is extremely useful. On the other hand, mobile-centric iOS with a keyboard and touch/stylus input is a little awkward. It's possible that Apple's decision to not converge its operating systems (beyond certain common features) might be coming back to bite it.