What: Shares of Sunoco (SUN -1.63%) slumped by double digits last month through no fault of its own. In fact, the primary reason its stock slumped was because parent company Energy Transfer Equity (ET -2.77%) announced that its CFO was being replaced with the CFO of its namesake master limited partnership, Energy Transfer Partners (NYSE: ETP). That news sent nearly the entire Energy Transfer Family tumbling lower last month, including potential future family members Williams Companies (WMB -0.99%) and Williams Partners (NYSE: WPZ): 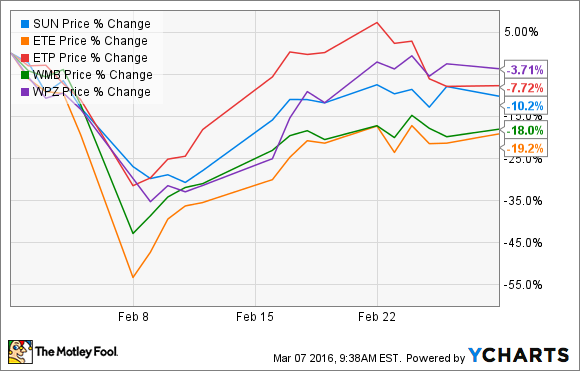 So what: On Feb. 8, the entire Energy Transfer Equity family was rocked with news that the company had unexpectedly replaced its CFO. While the replacement wasn't said to be due to a disagreement over accounting or financial matters, investors sold on the news because it added another level of uncertainty to an already uncertain situation. That's because there is a lot of ambiguity surrounding the outcome of its pending merger with Williams Companies and Williams Partners, which investors are worried will fall apart. The market has been inundated with conflicting reports suggesting that Energy Transfer Equity would like to walk away from the deal because of the significant deterioration in the energy market, which is restricting access to the capital.

That drama aside, Sunoco reported its fourth-quarter earnings last month, which were pretty good, all things considered. Distributable cash flow jumped to $90.1 million, which was nearly double the $51.1 million it delivered in the year-ago quarter. That's primarily due to a number of dropdown acquisitions it has completed with Energy Transfer Partners over the past year. The duo has one more transaction to close this year, which will then complete the transfer of Energy Transfer Partners' retail operations over to Sunoco.

Now what: There's a lot of uncertainty within the Energy Transfer Equity family right now because of its pending merger with Williams Companies. Until the dust settles, investors can expect increased volatility there. That being said, Sunoco's future is much more certain right now because its growth is pretty much locked in thanks to the dropdown transactions with Energy Transfer Partners. Instead, most of its focus will be on integrating the recently acquired assets and just running its business while trying to steer clear of the noise at its parent company.