The company is losing money and borrowed heavily to finance a major new deal.

Frontier Communications (FTR) pays a dividend -- yielding more than 7% at today's closing price -- seemingly because that's what most major players in the cable and Internet space do.

Comcast has steadily paid a dividend for many years, as has Verizon (VZ 1.67%). The difference, of course, is that those two companies make money and are returning profits to investors. Frontier not only lost money in 2015, it's also in the middle of making huge investments in growing its network, something it's borrowing money to do.

Given those circumstances, even though the dividend most likely helps prop up the company's share price, it seems like an ill-advised use of capital. 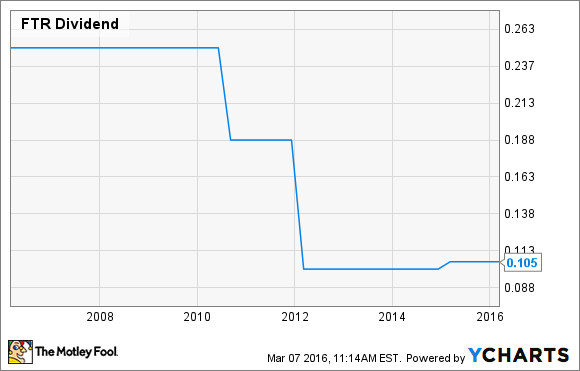 What is Frontier doing?
The once-tiny cable and Internet player is well on its way to becoming a mid-size player in the field. A big step in that direction will be completed as soon as April, when it closes on acquiring Verizon's wireline operations that provide services to residential, commercial, and wholesale customers in California, Florida, and Texas for $10.54 billion in cash. That purchase will give the company 3.7 million new voice connections, 2.2 million new broadband connections, and 1.2 million FiOS video connections.

To make the Verizon deal happen, Frontier borrowed $8.1 billion, according to The Wall Street Journal. Borrowing money for a major purchase is not unusual, but doing so while paying a dividend after a year in which the company lost nearly $200 million raises some red flags.

Frontier spent $456 million on its dividend for its common stock in 2015, and another $120 million for the dividend for its preferred shares. That's $576 million it spent to pay back shareholders at a time when it's both losing and borrowing money (for which it paid $119 million in financing costs and $728 million in interest costs in 2015).

Does this make any sense?
While there are reasons to believe Frontier's borrow-big-to-buy-big strategy will ultimately pay off, in the short term, it's an expensive gamble. Even once the Verizon properties are acquired, the company will still have significant one-time costs as it absorbs those customers. Yes, there will be efficiency gains that save the company money in the long run, but cash flow will be tight for the immediate future.

In 2016, Frontier is not likely to make enough profit to fund its dividend. That means it's paying off shareholders using borrowed money instead of using that cash to fund further acquisitions.

That strategy seems a bit short-sighted, and it's a way of acting successful before actually being so. Effectively, Frontier is the guy at the bar buying everyone drinks even though he's putting them on a credit card he may not be able to pay off.

Suspending the dividend in the short term would hurt Frontier's stock price, but continuing to pay it is about keeping up appearances rather than smart business logic. In the long term, the company should only pay money to shareholders when it's at least making enough money to cover the expense. Continuing to do so during a time of losses and heavy borrowing simply digs a deeper hole.

Frontier is paying a dividend because it always has, and because most of its rivals do. Unfortunately, it can't afford it right now and should stop spending money it doesn't have to prop up its share price.

Daniel Kline has no position in any stocks mentioned. He is wearing flip-flops even though it's only mildly warm. The Motley Fool recommends Verizon Communications. We Fools may not all hold the same opinions, but we all believe that considering a diverse range of insights makes us better investors. The Motley Fool has a disclosure policy.