Please ensure Javascript is enabled for purposes of website accessibility
Log In Help Join The Motley Fool
Free Article Join Over 1 Million Premium Members And Get More In-Depth Stock Guidance and Research
By Daniel B. Kline - Mar 8, 2016 at 11:30AM

Mattel (MAT 0.51%) stock soared in February and you can thank Barbie and Hot Wheels for starting the rally and rumors about a merger with chief-rival Hasbro ∫(HAS 0.02%) for keeping it going. 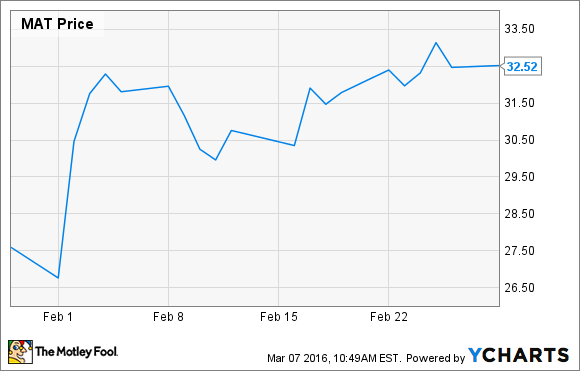 What: The toy company saw its stock close at $27.59 on Jan. 29 then run all the way to $32.53 when the month closed on Feb. 29, a 17.9% gain, according to data provided by S&P Global Market Intelligence. The run-up began after the company reported better-than-expect Q4 results, which showed renewed strength in its crucial Barbie and Hot Wheels brands.

Those two product lines are housed in Mattel's Girls & Boys Brands division, which was up 1% in constant currency versus the prior year, according to the earnings release. More importantly, worldwide gross sales for the Barbie brand were up 8% while global gross sales for the Wheels category, which includes the Hot Wheels and Matchbox brands, were up 26%.

So what: Given the intense competition in the toy industry Mattel had to fight off concerns that children had moved on from its core brands. Barbie has faced these questions before as tastes turned, at least for a while, to more realistic dolls, or other toys altogether. Hot Wheels don't generate the same press speculation about whether their enduring popularity will wane, but the classic line does have to battle higher-tech competition.

These Q4 numbers show that both lines did well in the holiday season and that efforts to tweak the toys to keep them relevant to today's kids have worked.

Now what: The sales numbers may have sent Mattel stock moving in the right direction, but it's fate in 2016 may well be dictated by whether its possible merger with Hasbro actually occurs. If such a deal were to happen it would face regulatory concerns and there are questions as to whether joining the two companies is even a good idea.

"I don't know if there would be a benefit, and I think that's why it hasn't happened yet," said Jim Silver, editor in chief of TTPM, a toy review and research firm, told The Los Angeles Times.

That might explain why the early month Mattel rally mostly stayed even as the month wore on. The company has righted its own ship, but it's future has become as uncertain as Barbie's devotion to any one particular career. But, whether the two companies merge or not, Mattel shareholders can take solace in the fact that two of its biggest cash cows look well setup for the future.