What: Shares of Omeros Corporation (NASDAQ:OMER), a biotechnology company developing products aimed at treating a variety of diseases, lost more than 12% of their value during the month of February, according to data from S&P Global Market Intelligence. 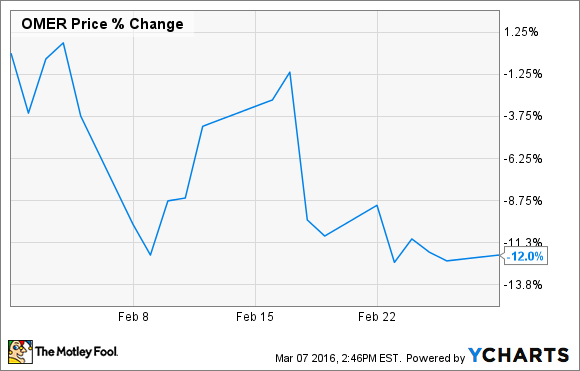 So what: Despite the stock's drubbing, the company did have some good news to report: It is seeing an uptick in demand for its compassionate-use program.

A Finnish physician requested special access to use OMS721 -- an experimental compound being researched as a treatment for thrombotic microangiopathies such as atypical hemolytic uremic syndrome -- in a patient who was previously being treated by Alexion Pharmaceutical's (NASDAQ:ALXN) Soliris, but was not adequately responding to the therapy. Omeros agreed to provide the patient with OMS721, and the treatment is expected to start this month.

In a separate case, the company received a request to provide OMS721 compassionately to a young patient with aHUS who was on long-term dialysis. The patient was in need of a kidney transplant but her aHUS prohibited her from being able to undergo the surgery. However, after the patients used OMS721, she became healthy enough to receive a kidney transplant.

Now what: Seeing an increase in demand for the company's compassionate-use program should be encouraging for Omeros' investors as it likely increases the odds that the OMS721 will eventually find its way through the regulatory approval process. If that were to happen then it might hold the potential to eventually wrestle some market share away from Alexion Pharmaceutical's Soliris. That's a huge market opportunity for the company -- Alexion sold more than $2.5 billion worth of Soliris in 2015 and expects that number to surpass $3 billion in 2016.

However, since OMS721 is only in phase 2 study, it will be some time before that could happen and, until then, investors' eyes will remain glued to how sales of Omidria -- a drug used during cataract surgery -- are going. So far, sales growth of Omidria has been a bit disappointing -- last quarter, sales of the drug were just $3.2 million, but management said that logistical and accounting issues masked the drug's much faster actual growth rate.

For 2016, Wall Street expects Omeros' revenue to jump more then 385% on the back of a huge increase in Omidria sales and believes that the company will cut its net loss in half. If Omeros can live up to those lofty expectations, it wouldn't surprise me to see the stock get its mojo back.