What: Shares of RF solutions provider Qorvo (NASDAQ:QRVO) rose 13.8% in February, according to data provided by S&P Global Market Intelligence. While the company's fiscal third-quarter results were mixed, a combination of a rising stock market and the announcement of an accelerated share buyback program propelled shares higher.

So what: Shares of Qorvo initially slumped following the company's earnings report on Feb. 4. Revenue of $620.7 million missed analyst estimates slightly, while non-GAAP EPS of $1.03 beat estimates by $0.09. Qorvo was formed by the merger of RF Micro Devices and TriQuint Semiconductor in early 2015, and compared to the combined revenue of those two companies during the prior-year period, Qorvo's revenue slumped 16.4% during its fiscal third quarter.

Shares started to rebound around the time Qorvo announced a $500 million accelerated share repurchase program on Feb. 17. The buyback program is expected to be completed during Qorvo's fiscal first quarter, and is part of the company's previous $1 billion share repurchase authorization announced in November of 2015. Following the completion of the accelerated program, roughly $250 million will remain for share repurchases.

Now what: Qorvo's rise during February was due in part to a rebounding stock market following a difficult start to 2016. Shares of Qorvo were down about 30% from the date of the completion of the merger that formed the company through the end of January, so a depressed stock price may have also played a role. 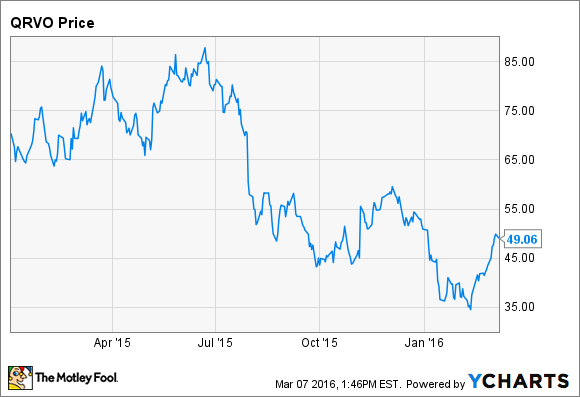 But the main driver appears to be the company's commitment to buying back a substantial number of shares over the next few months. With a market capitalization of about $6.8 billion, the accelerated buyback program would eliminate 7.3% of the company's shares at the current stock price. All buyback programs aren't created equal, but investors seem to approve of Qorvo's plan, and sent shares higher in February.