But it still posted an underwriting profit for the full year.

Last year certainly wasn't the banner year that GEICO expected. The company is ordinarily one of Berkshire Hathaway's (BRK.A -1.42%) (BRK.B -1.38%) largest drivers of underwriting income, but 2015 proved to be one of its weakest on record. 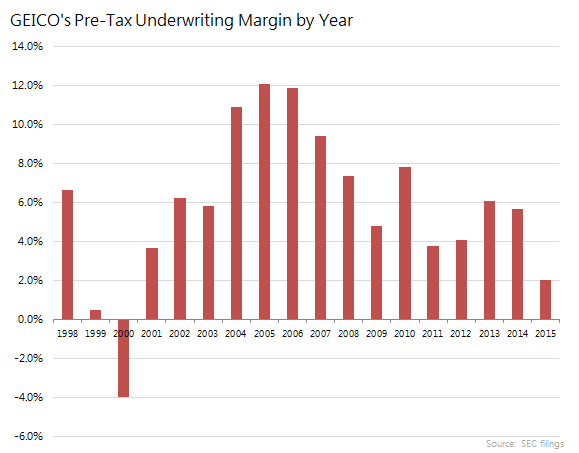 Said another way, for every $1 in premiums GEICO earned in 2015, it paid out $0.98 in losses and expenses. Only $0.02 fell to pre-tax underwriting profit. The company actually lost money on its underwriting in the fourth quarter of 2015.

Of course, this isn't to say that GEICO's best days are behind it. Universally, car insurance companies are reporting more accidents due to lower gas prices.

Total vehicle miles traveled surged as gas prices fell through 2014 and 2015, after flat lining in the years following the financial crisis. Americans are hitting the roads once again, and as miles traveled increases, the frequency of accidents increases, too.

In his annual letter to shareholders, Buffett wrote about GEICO's advantage over other auto insurers. It's an extraordinarily frugal company, which allows it to pass the cost savings on to its customers in the form of lower premiums. As GEICO grows, its scale gives it a greater economic advantage over its rivals and the business only gets stronger.

GEICO's cost advantage is the factor that has enabled the company to gobble up market share year after year. (We ended 2015 with 11.4% of the market compared to 2.5% in 1995, when Berkshire acquired control of GEICO.) The company's low costs create a moat -- an enduring one -- that competitors are unable to cross.

GEICO's underwriting expenses in 2015 were 14.7% of premiums, with USAA being the only large company to achieve a lower percentage. (GEICO is fully as efficient as USAA but spends considerably more on advertising aimed at promoting growth.)

GEICO employs about 34,000 people to serve its 14 million policyholders. I can only guess at the workforce it would require to serve a similar number of policyholders under the agency system. I believe, however, that the number would be at least 60,000, a combination of what the insurer would need in direct employment and the personnel required at supporting agencies.

Though the advantage of being the low-cost operator gives GEICO an inherent advantage over its peers, it won't result in outsize profits in every single quarter and every single year. Provided driverless cars aren't just around the corner, GEICO's best days are still ahead of it.